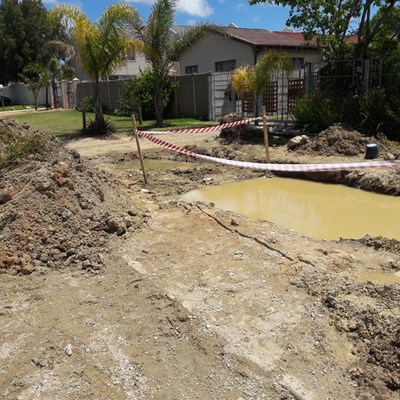 The main line water pipe in Merriman Street has ruptured at this point five times, the most recent time being last weekend. Photo: Myron Rabinowitz

"Once again the street was without water last weekend and we had to make do with a water tank parked in the road. Initially, I was convinced it was poor workmanship by the municipal workers, but I have now come to the conclusion that the main water pipe that runs down Merriman Street behind us, is old and collapsing. The pipe will have to be replaced, that is the only solution," said the resident, who does not want to be identified.

Christo Barnard, who worked at the municipality for 32 years and has been living in Wentzel Street for 25 years, said, "I can't deny the water cuts have been an inconvenience, but at least we can fill up our buckets with water in George. Think of those places where there is no water. The George infrastructure was planned and built for 50 000 people - today we have a population of well over 200 000. Something must give," he said.

Chantel Edwards-Klose, George municipal spokesperson, said the replacement of the pipe is dependent on the funds made available in the budget. "The 300mm diameter asbestos / cement water mains in Merriman Street, which is the old industrial line, has burst a number of times in the immediate past and is on the Civil Engineering Department's programme for replacement." A councillor who spoke off the record told the George Herald, "It looks as if we will have to replace the water pipe, even if we have to borrow the money."