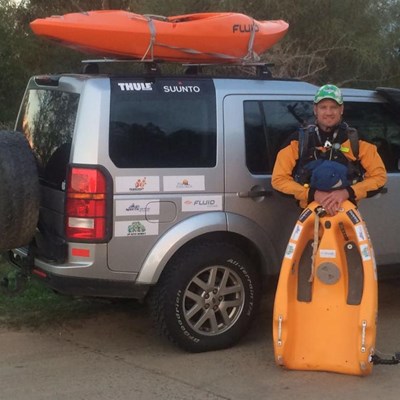 Roché Schoeman about to enter the Breede River near Swellendam in his attempt to better the Guinness World Record mark of 60km on a body board in 24 hours.
GEORGE NEWS - Georgian Roché Schoeman (33), the ultimate adventure seeker, failed in his attempt to set a Guinness World Record to swim the greatest distance on a river board in 24 hours.
The existing record is 60km. At 17:40 on Saturday 18 June he dived into the icy swollen Breede River near Swellendam but had to abort the attempt two hours later.
"I felt it was too dangerous with tree stumps coming down with the flooded waters and in the dark I missed two of the channels and decided to call it quits for now." Undeterred he restarted the challenge at midday on Sunday. "After 24 hours I emerged from the river but couldn't download the GPS coordinates. I think that the battery life was compromised by the icy water. According to my calculations I was 5km short of the existing record," said a disappointed Schoeman.
His ultimate dream is to attempt a solo unsupported ski trek to the South Pole to raise funds for the Up with Downs adult home. "This was excellent preparation for the Polar trek."
In 2014 he swam the 2 460km length of the Orange River from its source in the highlands of Lesotho to the mouth at Alexander Bay on the South African Namibian border, to raise awareness for the Up with Downs facility in George.
Schoeman's relationship with the Up with Downs Centre was spurred on by his life partner, Chanel who during her matric year in 2003, had to do an assignment on child development. She chose the Up with Downs Centre as her subject.
On her first interaction she realised that this was a visit that would change her life forever as the children with special needs crept into her heart. Once she had some insight on the centre she realised that these children would need special supervised care for the rest of their lives and she took a silent oath to always be available for them.
If his Antarctica adventure of 2 274km adventure from the Hercules inlet on the geographical coastline of Antarctica to the South Pole and back is achieved, Schoeman will be the first South African and the second person in history to complete the trek unsupported and hopefully return with a world record. The plan is to follow the original route of Captain Robert Scott, a British Royal Navy officer, and explorer who led two expeditions to Antarctic in the early 1900s.
To do the journey unsupported Schoeman will have to drag his 200kg of equipment and food supplies in a sled. "Many people have hiked to the South Pole and many have done so by getting food drops or vehicle support, but to do it alone and drag all your supplies with you is on another level of crazy and over the top.
"For me to have my name stamped on such an audacious endeavour, the ultimate test of human endurance, is my ultimate accomplishment," said Schoeman.
In preparation for the Antarctic expedition, he will attempt a solo assent of Mount Aconcagua, the second highest peak in the world. Once again, many people have climbed this mountain but very few do it solo and unsupported. Doing it alone doubles the risk as no one will be able to help detect early signs of acute mountain sickness or high-altitude cerebral oedema.
Roche Schoeman is the owner of an adventure company in George, Fearless Adventures. All photos can be found on the Fearless Adventures website (www.fearlessadventures.co.za) and Fearless Adventures' Facebook page and Instagram.
The sponsors for the Guinness world record attempt were Fluid Kayaks, Hello Garden Route and Sportscentre George.
Click here for previous articles: