Barely anything was left of the Toyota Etios after it hit the minibus head-on.

SEDGEFIELD NEWS - Tragedy struck on the N2 between Wilderness and Sedgefield when a head-on collision at Swartvlei claimed the lives of three girls and two women, of which one was a Swedish tourist, at 12:00 on Tuesday 8 January.

According to Southern Cape police spokesperson Capt Malcolm Pojie, the driver of a Toyota Etios, Phumzeka Folose-Platyi (40), who was driving from Sedgefield towards George, lost control of her vehicle, veered into the opposite lane and collided with an oncoming VW Caravalle minibus.

Platyi, her three daughters, Mihle (17), Ntandokazi (14), 18-month-old baby Iyazi and Lena Lönn (71), who was travelling in the minibus, were all victims of the fatal accident.

The driver of the minibus, a man from Rosemoor, and the male passenger both sustained serious injuries and were taken to hospitals in George. According to ER24 spokesperson Russel Meiring, the two men were in critical condition when paramedics arrived on the scene.

"Shortly after initial treatment they were transported to the Mediclinic George and the George Provincial Hospital for further treatment," he said.

Platyi and her daughters, who are from the Brackenfell area, were believed to be on their way home after the holidays when the fatal accident occured.

"While a family waited for their loved ones to return from holidays, they received the devastating news that they must identify them at a morgue," said Eden Cluster commander Maj-Gen Oswald Reddy after visiting the accident scene. "I am sure the children were looking forward to return to school and to be reunited with their friends. We regret that such an horrific accident occurred in our area.

"The loss of five people, including that of an international tourist, is heartbreaking and indeed very sad. Our hearts go out to the bereaved family. We appeal to the road users to be vigilant at all times and to obey the basic rules of the road in consideration of your own and others' safety." Emergency services clearing up the scene after the accident. 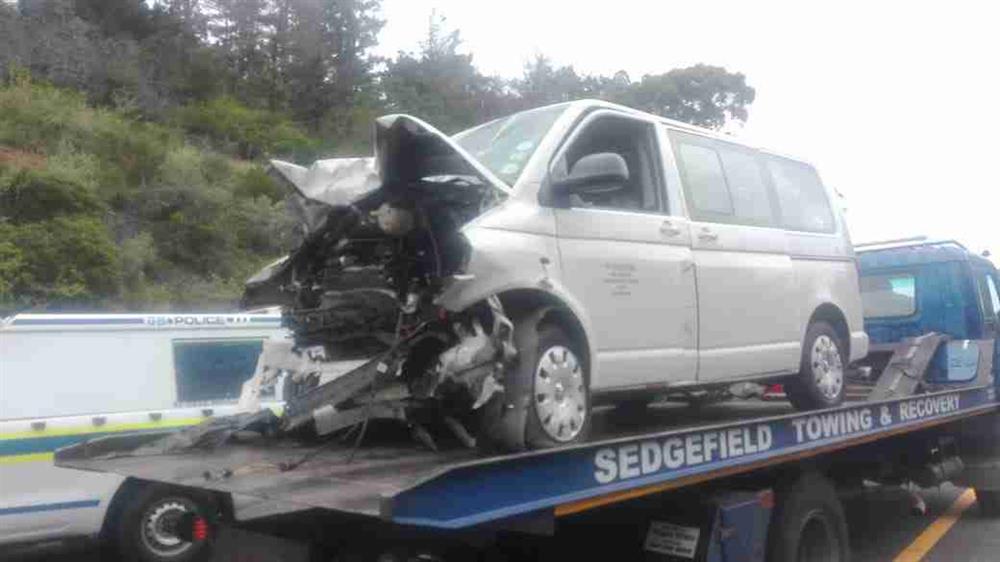 The badly damaged minibus on the back of a tow truck. The scene of the accident shortly after the head-on collision that claimed the lives of five people on Tuesday afternoon.

'We bring you the latest Sedgefield, Garden Route news'