Feud at school flares up 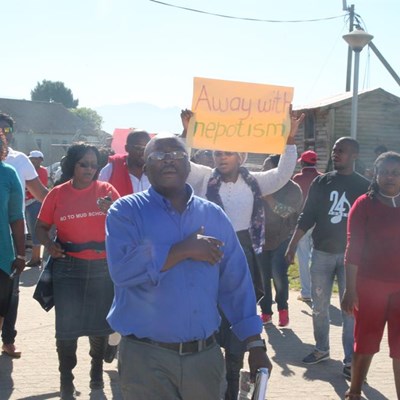 Sadtu branch chairperson Thembekile Kika leading picketers. Photos: Zolani Sinxo
GEORGE NEWS - The feud between MM Mateza Primary School principal Mgcineni Makhasi and members of the South African Democratic Teachers Union (Sadtu) has reignited. MM Mateza teachers, who are Sadtu members, picketed outside the school on Friday 21 April calling for the Western Cape Department of Education (WCED) to deal with Makhasi, whom they accuse among other things of nepotism and mismanagement.
Makhasi was asked by the department to excuse himself from the school premises for his own safety following a protest at the school in January when residents and local political party members stormed the school demanding he step down. Circuit Manger of the WCED, Jewel Jonkers, said at the time that the department would launch an investigation.
Makhasi allegedly lay off two gr.R teachers last year in October, which increased tensions at the school. The teachers alleged that he did not follow proper procedures and lodged a complaint at the CCMA.
The findings of the department and the CCMA, as well as notification about Makhasi's return to work, were to be communicated to the concerned parties by the department. Makhasi was cleared of the allegations by the WCED and the CCMA, and returned to work on Tuesday 18 April.
Sadtu Branch Chairperson, Thembekile Kika, said Jonkers allowed Makhasi to return to work without informing them of the outcome of the investigations. Sadtu members are also unhappy that the reinstated teachers were allocated to grades they have never taught before.
Jonkers was summoned to the school by the angry picketers. He told Sadtu members teachers should perform whatever duties they are called on to do.
"We have no special treatment. We don't employ teachers to be comfortable, we employ them to do their job," he said. Jonkers said a meeting will be held where he will table the department investigation report and that he would inform all relevant stakeholders of the date in due course.
Defending himself, Makhasi said, "Everything that has been done was agreed upon by the department. I didn't do things without the knowledge of the department."
Principal Mgcineni Makhasi (left) and Circuit Manger of the WCED, Jewel Jonkers.
Click here for previous articles:
ARTICLE & PHOTOS: ZOLANI SINXO, GEORGE HERALD JOURNALIST
'We bring you the latest George, Garden Route news'