Caleb Scott (left, 4) and Mia Kruger (4) at one of the holes in the stage floor.

GEORGE NEWS - The state of the Civic Centre left the head of a local crèche in despair when she arrived on Monday with busloads of children to practise for their year-end concert, due to take place on Saturday.

Aletta Janse van Rensburg, head and owner of Heeltyd Speeltyd crèche, described the venue as "unsafe for children" and not maintained to standard. "There are holes in the floor where guests are supposed to sit and two large holes on stage where the children should perform," said Janse van Vuuren.

"There are cigarette stubs in the sinks, the stage curtains don't work, the changing rooms where the children have to dress are stacked with chemicals, there is no working microphone and I was asked to supply the batteries myself.

"Furthermore the lights cannot be turned on and off and we found several large staples on the stage floor where the children perform barefoot."

A missing door between the changing rooms and the side hall where food will be served also poses a potential safety risk as it would allow children to run unchecked among the food stalls where hot dishes will be served. According to the complainant the door has been missing since their previous concert last year.

Director of Corporate Services Siphiwo James confirmed that he had spoken to the complainant on Monday morning and that all of her valid complaints have been addressed and resolved. As an apology, her payment for Monday's practice session has been reimbursed. There are cigarette stubs in the sinks.

James said a standard procedure was recently put in place that requires all hall bookings to be followed by a pre-inspection. The inspection sheet is meant to be signed by both parties (booking person and hall supervisor) and submitted to the maintenance team for any repairs.

"This pre-inspection for a booking today [28 October] should have taken place at the latest on Friday 25 October and regrettably did not take place," said James. Aletta Janse van Rensburg, head and owner of Heeltyd Speeltyd crèche, described the venue as "unsafe for children" and not maintained to standard.

"Furthermore there is a monthly hall maintenance inspection which is meant to be done for submission to management and this has not been completed sufficiently. The official responsible failed to follow procedure and/or escalate the complaints received three weeks ago to management and will be disciplined accordingly.

"The chemical store was in process of being retiled and as such the chemicals were moved into the bathrooms on stage as this venue can be locked for safekeeping.

"The chemicals have been returned to the assigned storage room. George Municipality regrets this incident and will continue to work on the upgrading of our halls as quickly as budget will allow." 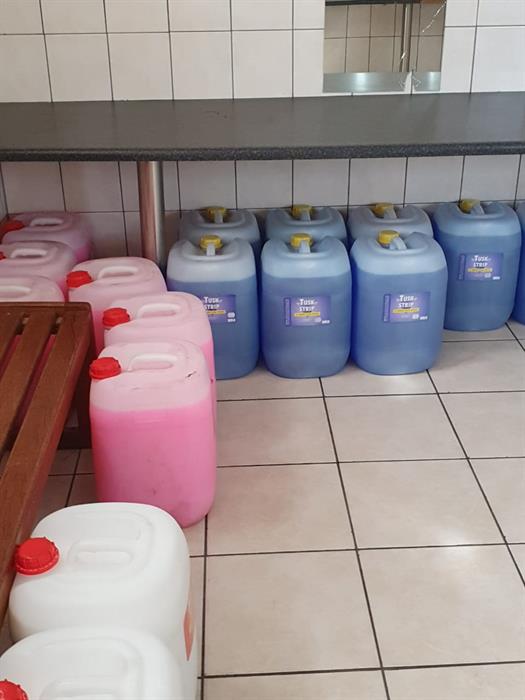 The changing rooms where the children have to dress are stacked with chemicals.