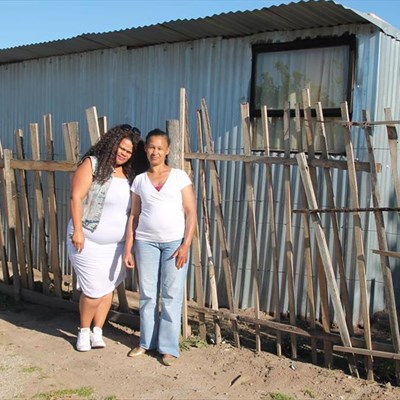 Sandy Joseph (right) has been staying in this emergency housing structure for five years, waiting for "emergency" funding to rebuild her house. With her is her neighbour, Icosa Eden District Councillor Thereza Fortuin. Photo: Myron Rabinowitz

GEORGE NEWS - Five years is a long time to wait for emergency funding, says Sandy Joseph, whose house in Primrose Crescent in New Dawn Park burnt down two weeks before Christmas in 2012.

The Josephs say after the fire they were told by municipal officials that in terms of the National Housing Code provision for Emergency Housing Programme (EHP), assistance is available and can be used to rebuild their house as soon as the application has been approved.

"That was five years ago and I am still waiting, despite numerous trips to the municipality.

"I understand that it is not the municipality that is responsible to rebuild my house, but surely they can help me to get hold of someone in Cape Town that has the authority to assist?" says Joseph.

Thereza Fortuin, neighbour and Icosa councillor at the Eden District Council, says, "I have explained to the Josephs that the financing will be done by the Western Cape Provincial Human Settlement Department.

"I am also bitterly disappointed in the George municipal officials for not pushing her case at the provincial office.

"The temporary corrugated iron structure erected on the stand is rusting away at the base and will soon be at risk of falling over".

"This was sent off on 8 March 2013 for funding approval to rebuild the house on erf 4888, New Dawn Park under the EHP. The report was then referred to the local provincial office of Human Settlements in George to conduct their own independent investigation with recommendations.

"The local office gave the assurance that they had positively recommended to their office in Cape Town that funds be made available to rebuild the house."

Lubbe says his department is continually following up on this and other matters but are still awaiting funding.

"The latest request was directed to the Head of Department: Human Settlements on 11 July 2017 to intervene in the matter, asking that funding be made available speedily. Up until now we are still awaiting feedback and funding authority from province."

At the time of going to press, the George Herald was still waiting for a reply from the provincial office to its media enquiry.