Garden Route Disaster Management chief Gerhard Otto says there was a 13% decrease in the number of new cases reported during the past week compared with the previous week.

The NCID stressed that it is therefore important that people who have previously had Covid-19, continue to adhere to public health measures.

GARDEN ROUTE NEWS - The number of new Covid-19 cases in the Garden Route is steadily declining.

Garden Route Disaster Management chief Gerhard Otto says there was a 13% decrease in the number of new cases reported during the past week compared with the previous week.

A total of 1 165 new cases were reported in the week up to Tuesday 19 January, while there were 1 962 new cases in the previous week.

"There has been a welcome negative change in all sub-districts, except Kannaland, which shows an increase. It is particularly good to see a reduction of 5% in new cases reported in Hessequa, which has been under pressure for a few weeks."

Fewer weekly deaths
Weekly Covid deaths in the Garden Route are still decreasing. During the week up to 19 January, 63 deaths were recorded compared with 71 the previous week and 83 the week before that.

For the first time, Kannaland has the highest number of active cases per 100 000 people (849), with Hessequa (771) second. Both sub-districts still have a high number of new cases every day. The severity of the second Covid-19 wave is demonstrated in this graph that compares the number of infections of the first wave with the second wave. It was provided by the Garden Route District Municipality.

'New variant not causing more severe disease'
The new coronavirus variant, 501Y.V2, is 50% more transmissible than the original strain, but it is not causing more serious disease and there is no scientific evidence that reinfections are increasing with the new variant.

This is according to infectious disease expert Professor Salim Abdool Karim, who spoke during a panel discussion of experts with national Health Minister Zweli Mkhize on Monday 18 January.

Karim also said there is no scientific evidence that the new vaccines against Sars-CoV-2 are effective against the 501Y.V2 variant.

Possibility of re-infection
In a statement on 19 January, the National Institute for Communicable Diseases (NICD) answered the question whether a person can be re-infected with the new variant if they already had Covid-19 from older variants.

The NICD said the blood samples from half the [previously infected] people they tested showed that "all neutralising activity (against the virus) was lost".

"This suggests that they may no longer be protected from re-infection. In the other half, the levels of antibodies were reduced and so the risk of re-infection is not known."

The NCID stressed that it is therefore important that people who have previously had Covid-19, continue to adhere to public health measures.

"Protecting ourselves through masks, regular washing or sanitising of hands, cleaning of surfaces, and social distancing remain the best defence against all Sars-CoV-2 viruses, including the new lineage."

People who have recovered from Sars-CoV-2 infection are usually protected from being infected a second time (called re-infection). This is because they develop neutralising antibodies that remain in their blood for at least five months, maybe longer. - NICD 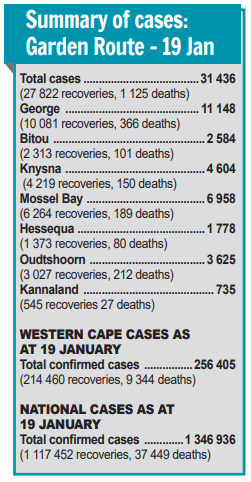