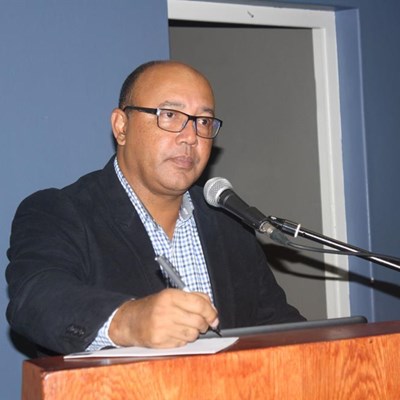 Christo van der Rheede, COO of AgriSA, speaking at the George Business Chamber AGM on Friday 12 May.
GEORGE NEWS - George managed to surpass the 3,3% average growth rate of the Western Cape economy by achieving an average of 4,2% between 2004 and 2015.
This is according to Dr Willie Cilliers who was elected as chairman of the George Business Chamber for his third consecutive term at the annual general meeting of the Chamber this morning.
Delivering his annual report, Cilliers said George contributed 40,8% (R16,341-bn) to the GDP of Eden in 2015, more than twice that of Mossel Bay that is second with a contribution 17,2% (R4,86-bn).
George also makes a favourable contribution to the employment market by providing 36,7% of jobs in Eden, with its unemployment rate of 20,7% also being below the national figure of 26,6%.
The award-winning Chamber, which is being run as a formal non-profit company since last year and had the biggest turnover of all Chambers in the province, played a huge role in the growth of the town, he said.
'Government can't ensure food security'
Agri SA Chief Operating Officer Christo van der Rheede, guest speaker at the event, highlighted the role of AgriSA and Business Chambers in changing the local agricultural landscape to ensure food security.
He said South Africa's biggest crisis is about food and the growing population. He warned that the several million South Africans going to bed hungry every night are a serious threat to stability in the country. Hunger is leading to a massive rise in criminality and violence as witnessed during the recent protests in parts of the country where people went on the loot.
Read more in the George Herald on Thursday about how Van der Rheede comes to the conclusion that Government is not able to provide food security - it is a task that rests on the shoulders of commercial farmers and business.