The Volvo Ocean Race fleet is charging into a challenging first night at sea with winds over 30-knots forecast... 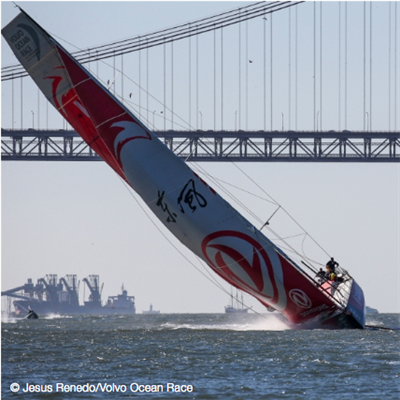 Conditions were perfect for the leg start, with bright blue skies, and a 15-20 knot Northerly breeze that allowed the fleet to reach up and down the Tagus River past the city front of Lisbon.

After exiting the river and heading offshore past the protection of Cascais, the wind is forecast to build to over 30-knots, with a heavy ocean swell near 4-metres. It will be a fast and challenging first night at sea as the teams charge to the southwest.

“It’s going to be fast,” said Dongfeng skipper Charles Caudrelier. “We have been preparing for this, training in strong winds for six months, so I hope we are ready. We have some good drivers in these conditions so I hope we will be fast.”

And indeed, within 15-minutes of clearing the mouth of the river, the fleet was already seeing over 30-knots of wind and Dongfeng Race Team recorded a boatspeed of nearly 33-knots.

Charlie Enright, the skipper of race leader Vestas 11th Hour Racing was in a strong position early, but appeared to be caught out with too much sail up for the final stretch down the river, and fell back to fifth place.

“We’re confident, but not cocky,” Enright said before the start. “We want to take what we’ve learned and apply it to leg 2. It’s going to be a much different leg. It will be a lot more boatspeed oriented and we’re looking forward to that.”

“The real race starts now,” said Xabi Fernández, the skipper of MAPFRE. “Today we will sail in a couple of days in heavy winds. Everyone will be competitive so we’ll need to go as fast as we can.”