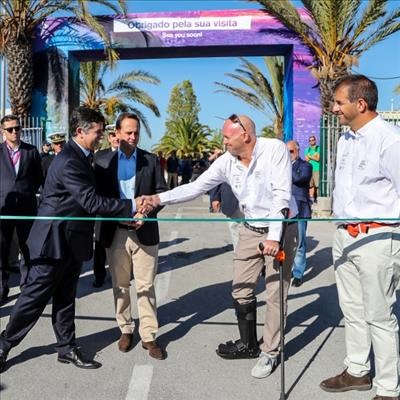 WATER SPORT NEWS - The boats arrived in the Portuguese city at the end of Leg 1 on Saturday 28 October, and today, the doors to the Village have officially been opened to the public by Lisbon’s mayor Fernando Medina and Portugal’s Economy Minister Manuel Caldeira Cabral.

As they cut the ribbon to the Village, the navy band played the Portuguese national anthem.

It’s the third consecutive edition that Lisbon has hosted the race – and this time, it’s with a bit of a twist.

Whilst the city normally welcomes the fleet towards the end of the race, this time, it’s the first stop following a 1,450nm sprint from Alicante – and a chance for the teams to prepare for a more traditional Atlantic Ocean dive to Cape Town on Leg 2.

The Lisbon stopover is a return to a place the sailors know well, having ended Leg Zero, spent the Assembly Period, and started the Prologue race in Lisbon in the months prior to Race start.

Since 2016, the city has been home to the Volvo Ocean Race Boatyard, a permanent facility where our team of boatbuilding experts have been working round the clock to refit the boats and prepare them for the 2017-18 edition.

Don’t miss the chance to check out the Boatyard while you’re visiting the Race Village. It’s a fascinating look at just how much work goes into getting the boats ready to race.

There’s on the water action, too. The Mirpuri– Hifly In-Port Race takes place on Friday 3 November, and the Leg 2 start is on Sunday 5 November.

Don’t miss any of the fun in Lisbon – it’s going to be the best stopover yet!