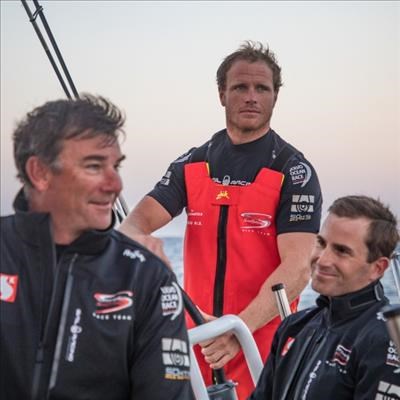 WATER SPORT NEWS - David – you’ve completed Leg 1 of the 2017-18! Leaving the dock must have been a big moment for you having wanted your own team in this race for over two decades…

The time for reflection was before we left, to be honest. Once we said goodbye to everyone and got out there, it was job in hand, and making sure that everyone was doing a good job.

Things got off to a pretty crazy start, with the boats racing through the spectator fleet…

We just did our best to get through it – I saw Dee’s reaction and she seemed a bit more shocked than we were. We’ve been steering our 100 footer through traffic for a while, so it’s all part and parcel for us. I’m sure the spectators got a good look at the racing – I almost got a prawn in my mouth at one stage from one of the corporate boats!

There was plenty of close racing on Leg 1, which will have given you a good opportunity to check out the other boats…

For sure – what we don’t know, is what we don’t know. The only way we find out is by doing the race. We were in sight of each other the whole time. The guys are a bit disappointed, they have high expectations. They were down when Dongfeng overtook us reaching. I said they’ve already done one lap, and we were pushing them the whole way. Other teams are looking for placings and where they go, but the best way for us to catch up is sailing alongside another boat, and pretty soon there’ll come a time where we’ll be confident to sail in our own bit of water, with no one else around, and we’ll be confident we’re not off the pace. As soon as we know we’re fast enough, we won’t have to race the fleet.

What did you learn on Leg 1?

The key moment for us was the way that AkzoNobel and Vestas sailed past us early on with a three sail set up. We’re all sailing downwind with an A3 – both boats were behind us, and they both sailed past very quickly with a MH0, a J2 and a J3, a three sail heading. They were significantly faster, maybe 2 knots, and to me, that was a big moment. A lot of your decision making in this race is based around your position in the fleet – it’s a risk management thing – so for me that was a turning point. For us, it was just a matter of getting the binoculars out and catching up. We hadn’t done the race before, we hadn’t sailed the boat much before, but once we got the same set up, we were good.

You allowed team AkzoNobel to borrow one of your sailors, António Fontes, for the leg, at short notice on the morning of the start. How did that come about?

One of their guys who has sailed with Haylesy in the past mentioned they needed a sailor, and António ticked the boxes as he was qualified to the right level. I had Seng Huang Lee, our owner, there, and we both agreed that it was the right thing to do. The deal was done in the Sailor’s Terrace. It’s got nothing to do with how we finished, or they finished, or doing the right thing by the Volvo Ocean Race. That’s a plus of course, but it’s just about what kind of person you are, I think – you need to be a sportsman above everything else, and I try to engrain in my children that they’re the sort of morals you carry through life. Just because we’re at the highest level of the sport, if you throw those morals out of the window then you’re a fraud.