Cronje is key for Jantjies 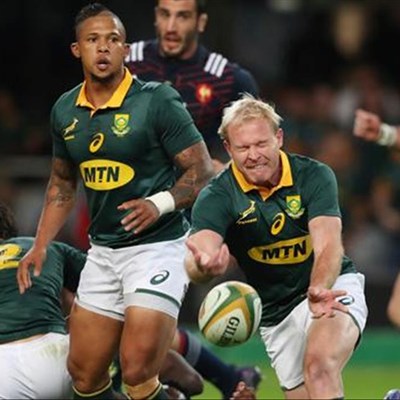 RUGBY NEWS - A glance at the team list might suffice for those who want to know why Elton Jantjies is not under the same cloud during his latest visit to Port Elizabeth that he was under when he was last in this city to play a test match for the Springboks.

Jantjies will wear the Bok No 10 in the opening test of the Castle Lager Rugby Championship against Argentina at Nelson Mandela Bay Stadium and unlike 14 months ago, there are much fewer question marks hanging over his ability to play international rugby and to deal with the pressure at the highest level.

To refresh memories, the Boks were here for the deciding test of the series against Ireland last June.

Jantjies had been ordinary in the two previous matches, and had even struggled on his home field of Emirates Airlines Park the week before.

Even his most ardent supporters were joining the growing consensus that he was battling to make the graduation from Super Rugby to international level.

Of course, there were plenty of theories as to why Jantjies was struggling. One of them was that he was struggling to adapt to what new Bok coach Allister Coetzee required of him.

The pair had worked together at the Stormers a couple of seasons before that, and the relationship hadn’t always gone smoothly.

And Coetzee’s call for the Boks to be more conservative with their balance between kicking and running was at variance with the no-fear approach preached by Johan Ackermann at the Lions.

The real reason for Jantjies’s battle to make the transition to test rugby in 2016 may though have been rooted in the identity of the man wearing the No 9 jersey and playing alongside him.

Faf de Klerk, Jantjies’s regular Lions halfback partner at the time, suited the Lions’ game, but it was patently evident in the first test he played against Ireland at Newlands that he lacked the kicking game that would take some of the pressure off Jantjies.

There was a chorus of derision to any suggestion that De Klerk might have fallen short in his debut test, but it did look like he and Jantjies lacked the variation required for test match rugby.

What worked at the Lions didn’t work at the Boks, and it wasn’t long before De Klerk, who was a highly popular initial Bok selection, was jettisoned.

Unfortunately for Jantjies, Coetzee also ran out of patience with him, so he also made way during the course of the international season, with veteran Morne Steyn at one stage being called up to wear the No 10.

Much has happened though since then, and De Klerk was replaced as the Lions’ starting scrumhalf this season by Ross Cronje.

Not only did Cronje fit in well with the Lions' style of play, he also provided some of the variation, decision making and kicking skill that was missing before and which helped ease the pressure on Jantjies and allowed him to flourish.

Jantjies’s least assured performance in the series against France was probably in the last test, when Cronje was not there because of injury, and that might not be a coincidence.

Cronje is not Fourie du Preez but he does have the allround game that can ease some of the pressure on Jantjies, and he recognises that as an important part of what he brings to the Boks.

“Elton enjoys kicking for space but teams sometime target him and I have to release some of that pressure,” agreed Cronje after being making his return to the Bok team for Saturday’s opening Castle Lager Rugby Championship clash of 2017.

“Elton is a great ball carrier and I think we provide a great link between nine and 10. We help each other deal with the pressure, and that particularly pertains the kicking game.”

Cronje said he was excited to be back in the Bok team and was looking forward to building on his good start to his Bok career. Although this will only be his third test match, he does talk like he plays – in other words like a seasoned international.

“We are very excited to get going and I feel we have an exciting backline at our disposal which if we play well could unleash great possibilities. We have lots of grit plus a bit of flair, and that makes for a good mix that is exciting from a backline point of view.”

Cronje, like newcomer Uzair Cassiem and coach Coetzee, hinted that the Boks had planned well to counter the Puma tactics that had condemned the South Africans to defeat on Argentina soil last August.

“We know they were successful with their aerial attack last year but this time we have a definite plan to counter them. We know what we want to do when they kick on us,” said Cronje.