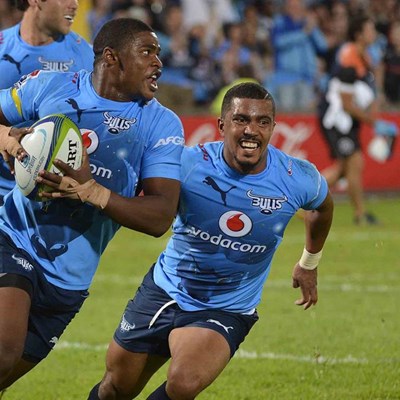 Warrick Galant during a game for the Blue Bulls. Image: SA Rugby Magazine
NATIONAL NEWS - With the festive period in the rear-view mirror and 2017 upon us, it’s a time to look forward.

Planet Rugby compiled a XV of players poised to breakout this year and grab the rugby world’s attention over the next 12 months.

These players should all get their opportunities in the Premiership, PRO12, Top 14 and Super Rugby this year, whilst some will even have a shot to make a mark in the Test arena and expect all of them to take the chances that come their way.

There is no shortage of possible further honourable mentions here, with plenty of talented young full-backs the world over on the cusp of making the leap, but perhaps none as exciting as Gelant. The former Junior Springbok would almost certainly have broken out in 2016 were it not for a broken jaw and a knee injury ruining his Super Rugby season.

He brings all the control a team needs at 15 with good tactical kicking and a strong aerial game, but also has the counter-attacking spark to make the Bulls a potent side with ball in hand. He is a strong candidate to be fast-tracked into the Springbok set-up if he can stay fit this year.

Speaking of fast-tracking, that’s exactly what happened to Ioane last year, progressing from the New Zealand Sevens side to the All Blacks, during their end of year tour to Europe. We are only just beginning to scratch the surface with the 19-year-old, however.

The Blues looked a much more potent force during Tana Umaga’s debut campaign as head coach last year and Ioane should make himself an integral cog in Umaga’s continued rebuild of the Auckland side. His long-term future may lay at outside centre, but expect him to wreak havoc on the wing this year, outside Piers Francis and Sonny Bill Williams.

Ward captained the Junior Springboks in 2016 and was one of the few shining lights in an all-round desperately disappointing year for South African rugby. He has made the move from the Kings to the Sharks during the offseason and is just the kind of young leader the Durban-based side needs to build around moving forward.

The Sharks have never been a side to throw caution to the wind and the fact Ward is a very adept defender will help him make his way to the starting XV, where he will then be able to demonstrate his effectiveness with ball in hand, both as a powerful carrier and an adept line-runner.

After setting the World Rugby U20 Championship alight last year, Barrett decided to sign with the Hurricanes and join his eldest brother, Beauden, in Wellington, rather than staying in Canterbury and joining his other brother, Scott, at the Crusaders.

The reigning Super Rugby champions lost Willis Halaholo to Cardiff Blues this past offseason and Barrett will be in the mix to start right from day one. If he shows the chemistry with Beauden that you would expect from siblings, not to mention two players built from a very similar attacking mould, then he will be among the favourites for rookie of the year in Super Rugby.

Cokanasiga comes very close to pipping Giles here but with no guarantee of Premiership rugby, Giles gets the nod on the basis of the quality of opposition he will face this year. He has already taken the step up to senior rugby with ease and whilst certainly still a diamond in the rough, the future looks very bright for the Welshman.

Cementing his place in the Ospreys team will be priority number one for Giles but making his Test debut in June, when a number of players will be away with the British and Irish Lions, seems likely if he can keep up the form he has displayed in the first half of the season. At the very least, he should head to the U20 Championship in Georgia and remind everyone why he has star potential.

It’s been a busy couple of years for Shillcock. After making his debut at the age of 17 for Worcester in the Championship playoffs, he has gone on to fill in for England U20s at scrum-half, breakthrough into Worcester’s senior set-up at full-back in Chris Pennell’s absence and now emerge, still at just 19 years of age, as the side’s most potent fly-half.

Worcester is currently embroiled in a relegation battle with Bristol and Shillcock will need to be at his best to keep them out of trouble come the end of the Premiership season. If he can help deliver another year of Premiership rugby for Worcester, look for him to spearhead England in their attempt at a fourth U20 Championship this summer, as well as take another big step forward in senior rugby in the 2017-18 season.
Read more on Planet Rugby.