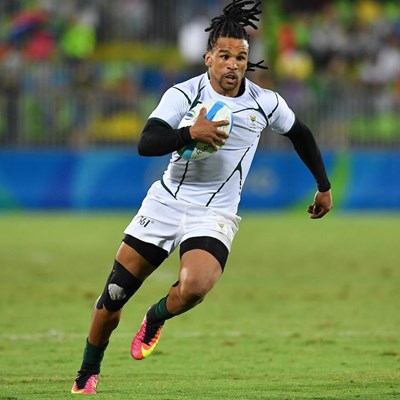 They are now one match away from potentially adding to South Africa’s medal tally in Rio.

Seabelo Senatla scored twice to go along with tries from Rosco Specman and Kyle Brown as the Blitzboks easily saw off Australia.

Earlier in the day they had lost to the same opponents so would be relieved at overcoming this hurdle.

They next take on Great Britain tonight at 8pm South African time and will be concerned as Senatla nursed a sore wrist after the match.

At the same time, Fiji sent New Zealand home, Japan continued their fairytale run to the semifinals and Britain edged Argentina amid the high drama of extra time as the inaugural Olympic sevens tournament got down to the final four on Wednesday.

World Series champions Fiji’s clash with New Zealand was an encounter that many thought would take place in the final until the All Blacks were stunned by Japan on Tuesday and beaten again by Britain in their final pool match on Wednesday.

Depleted by injuries to Sonny Bill Williams, Joe Webber and Scott Curry, the 12-times World Series champions sneaked into the last eight when Fiji beat the United States in the last match of the opening round.

Fiji defied the wet conditions by opening the match with a magnificent move that took them from under their own posts to the New Zealand line in series of charges and handoffs, with captain Osea Kolinisau touching down.
Click here for a photo gallery taken by Roger Sedres.

Read more about: Blitzbokke beat Australia to book a place in semifinals