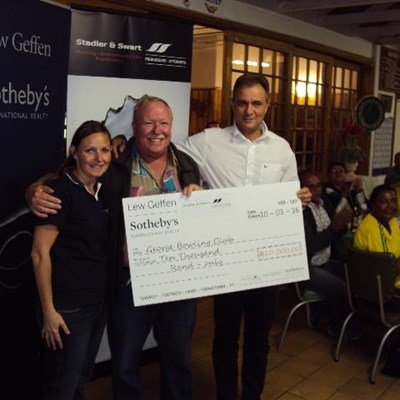 At the presentation of the sponsorship cheque at the prizegiving of the Lew Geffen/Sotheby's /Stadler &amp; Swart Business Bowling League Challenge are, from left: Lisle Macdonald (Sotheby's), MC Peter Lazenby and Tim Kirby (Sotheby's).
GEORGE NEWS - York High, leading from scratch, clinched the Lew Geffen/Sotheby's /Stadler & Swart Business Bowling League Challenge last Thursday.
SWD Action Bowls, who in the latter stages of the competition took a commanding position, finished in second spot followed by Wilderness Whales & Tavcor York in hot pursuit.
The Plate was won by Lew Geffen Sotheby's who had stormed into the lead on week three. However, second position was more of a challenge with Raubenheimers, ADT Security and George High 1 vying for honours. But, as often happens, a dark horse upsets the apple cart and it was George High 2 that finally pulled a rabbit out of the hat on the last evening to surge ahead into second place.
Supaquick won the booby prize, sponsored by Millers, for the team who tried their best but lady luck avoided them.
The Business Bowling League has spanned six weeks with 26 teams in action.
Peter Lazenby took control as MC for the prize giving and in his inimitable manner enthralled all present with his repertoire of thanking all concerned plus throwing in the odd joke before the prizes were handed out.
The George Bowling Club expressed their heartfelt thanks to Lew Geffen/Sotheby's /Stadler & Swart for their generous sponsorship of the tournament.
'We bring you the latest George, Garden Route news'