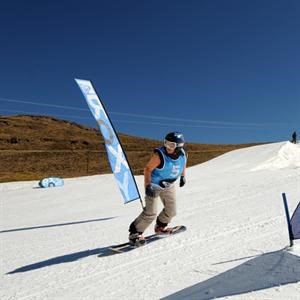 Back in South Africa she took the time to instruct youngsters in this sport and these days, although living in Mossel Bay without any snow, she yearly attend the Quiksnow South African Snowboarding festival with great results! She again competed against international competitors and showed them what the South African’s are made off.
Snowboarders all across the country prepared for Afriski snow champs while snow makers at Afriski Snow Resort in Lesotho waited eagerly on the perfect snow-making conditions to add to their already premium slope.
The SA snow addicts sharpened rails, stretched their hamstrings and tightened bindings in anticipation of South Africa’s biggest snow champs yet.

Top local skiers and snowboarders were battling it out for the top spots as all of the country’s best skiers and snowboarders decended on the Afriski Ski resort, just five hours from Johannesburg.
The slope course this year was more technical than before, keeping riders pushing their skill to the next level.
Some of the features included a flat-to-down box where riders had to show more technical manoeuvres on the butter-box, into a rainbow into a 50 feet Big Air and then a wall ride.

Well-known names in the woman’s division (Slope Style was that of Marta Jekot who recently returned from Europe where she was competing on the FIS Europe Cup Snowboarding circuit. Marta had an incredible season and is currently ranked joint first in the Slopestyle discipline - an incredible feat for an African competitor.
In the men’s competition the highly competitive contenders to watch out for, included Matthew Amoretti, Katlego Maponyane, Robbie Alunni and Ruben Storbeck.