Danny Leon is one of a new breed of skateboarders who are in training for the Tokyo Olympics.

SKATEBOARDING NEWS - Hamburgers are out, going to the gym is in. With skateboarding set to make its Olympic debut at the Tokyo 2020 Games, top skateboarders are settling down and preparing as athletes in the bid to qualify.

Decked out in jeans, a loose dark shirt and the almost obligatory baseball cap, Leon is well positioned to fly the flag for Spain in Tokyo - and he is taking it seriously.

"Before it would be just hitting the streets with your skateboard and skating. Now we train," says Leon.

"We exercise and stretch after and before, we take care of our bodies more, eat better, no hamburgers and pizzas."

Leon is one of several top skateboarders currently in Barcelona to take part in the World Roller Games, the world's largest event comprising all championship roller sports disciplines.

"Right now I go to the gym a lot to improve my resistance and then I train every day four hours a day, repeating tricks all the time," said Portugal's Gustavo Ribeiro.

The 18-year-old is ranked number two in the world in the "street" skateboarding category and has a good chance of finishing on the podium at the Olympics.

In Tokyo, skateboarders will have the chance to compete in the "street" and "park" categories.

"It sounds crazy that I can get a gold medal representing my country at the Olympics," said Ribeiro. 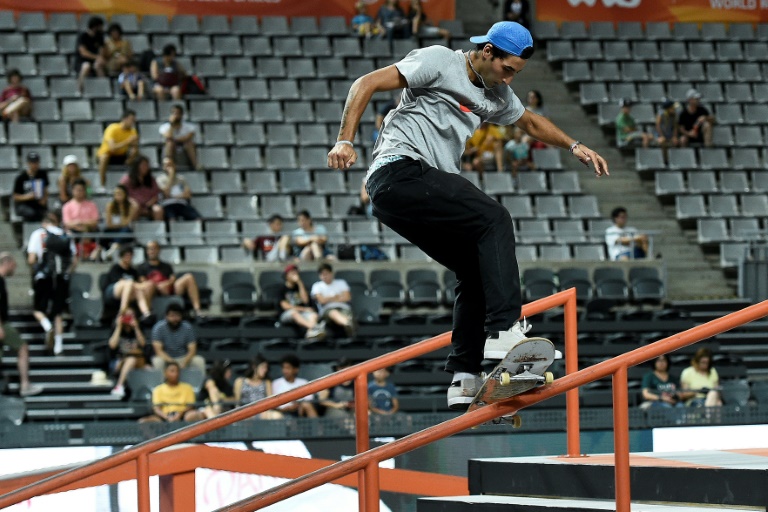 Skateboarding is a lifestyle and a job for Matias del Olio.

His excitement contrasts with the misgivings many in the skateboarding community displayed when Olympic chiefs in 2016 supported a proposal to allow the sport in the Tokyo 2020 Games.

They feared it could curb skateboarding's street culture roots.

"If you want to do it for fun, you can go to the street, do your tricks, have fun and have some beers. But I want to take it seriously," said Argentina's Matias Dell Olio.

"I get up early, I work out at the gym, I stretch, I eat better. I have been skating since I was six, that's my lifestyle. But it's also my job."

Peru's Angelo Caro, 19, said the inclusion of skateboarding in the Tokyo Games opened the doors to him of his country's top training centre for athletes. He hopes it will also shatter stereotypes about skateboarders.

"People who see us as lazy and potheads will see that it is really a beautiful sport, that involves a lot of talent and effort. Every day we fall, we hurt ourselves, it's a real sacrifice," added Caro, whose body is covered in scars and bruises.

A country can send a maximum of three representatives per category.

Qualification depends on points obtained during major international competitions, a system which discourages them from attempting spectacular tricks.

"We work with a calculator. There are tricks that are worth eight or nine points, but if you only need seven, you do an easier one to secure a spot on the podium," said Dell Olio.

Aside from preparing tricks, Leon is worried about one other thing ahead of the Olympics.

"How should we dress? I can't imagine wearing track pants. We all skate in jeans, with a cap. I hope they let us go however we want," he said.