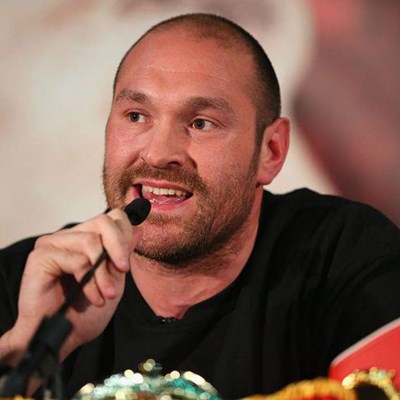 "Hahahaha u think you will get rid of the GYPSYKING that easy!!! I'm here to stay," Fury wrote on Twitter. "#TheGreatest just shows u what the Medea (sic) are like. Tut tut."

He added: "Soon as I get better I'll be defending what's mine the heavyweight thrown (sic)."

The provocative 28-year-old British brawler, dogged by reports he failed a drugs test for cocaine, had earlier declared himself "retired" in a profanity-strewn tweet.

"Boxing is the saddest thing I ever took part in, all a pile of s***," he had written three hours earlier. "I'm the greatest and I'm also retired..."

The British fighter recently cancelled an October bout with Wladimir Klitschko to defend his WBA and WBO heavyweight belts.

Contacted by AFP, Fury's promoters, Hennessy Sports, did not wish to comment.

Fury had been scheduled to earn the biggest purse of his career in a rematch with Klitschko at the Manchester Arena after shocking the Ukrainian last November to become world champion.

However, Fury withdrew from that date as his camp claimed he had been "declared mentally unfit to fight".

Cocaine, while an illegal drug, is not banned in boxing if taken out of competition.

In between his two Twitter announcements, Fury posted a link to a YouTube video in which he said George Kokkalenios, an American lawyer, was "telling the truth about the corruption in boxing".

The video showed Kokkalenios at the wheel of a car, talking to an unidentified person behind the camera and suggesting Klitschko was somehow involved in the cocaine reports about Fury.
Read more on SuperSport.