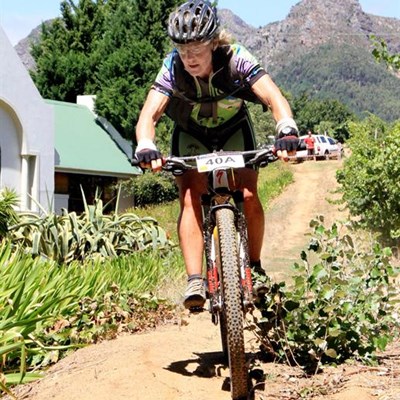 One of the stars of the 2015 TransCape MTB Race, Bonny Swanepoel who will be hoping to improve on her fourth place finish in last year’s event when the 2016 TransCape, which starts in Knysna on Sunday morning (February 7) and finishes on Valentine’s Day in Franschhoek. Swanepoel will be riding with the experienced Martin Buck. (Photograph by Yolanda van der Stoep)
NATIONAL NEWS - The second edition of the exclusive, multi stage TransCape MTB Cycle Race gets underway in Knysna on Sunday morning (February 7) with the élite field of 130 adventurous cyclists guaranteed to be tested to the limit on their 750km trek to Franschhoek.

While the route, dubbed as, “A beauty ...but also a beast”, by route designer, Andrew White, will provide a very stern endurance test it will also enable the local and international field of riders an opportunity to experience a full range of terrain, riding conditions and human emotions. Not to mention breathtaking scenery and great hospitality.

Among the riders lining up for the start at Knysna’s Waterfront will be one of the stars of the inaugural race last year, Belgium’s Niek Lingier, who won the 2015 event with compatriot, Bj?rn Rondelez.

While Rondelez hasn’t made the trip to South Africa, Lingier arrived in the country earlier in the week and is looking to defend his title, this time with the help of fellow countryman, Jurgen van don Bron.

While the two have never raced as a team they have trained a lot together and, “It seemed logical that we race together in the TransCape this year,” says Lingier.

Despite coming from a freezing European winter this combination could prove to be the team to beat, with Lingier obviously no stranger to local conditions - this being his 10th year in a row competing in a mountain bike events in SA, including last year’s TransCape. Van don Bron will also be comfortable having participated in the Absa Cape Epic before.

When quizzed about their chances of winning, the defending champ says he has trained hard as he is sure the field for this year’s TransCape will be a lot stronger than for the first race, “But let’s see how far this (the training) will bring us in 2016.”
I’m just glad to be back, he adds. “The TransCape is the greatest concept I ever experienced in all my years of doing stage races. While you suffer a lot during the day’s racing it is very relaxing after with good food and company. The perfect combination for me and you don’t sleep in tents which is so good for recovering, especially as I’m not in my 20’s anymore.”

Swiss and British star
A rider Lingier says he will keep an eye on during the race is one of the biggest names in international mountain biking, Esther Süss.

The formidable Swiss rider, who competed in the 2012 Summer Olympics in London as a member of the Swiss cross-country mountain bike team, and has been victorious at the Absa Cape Epic twice - winning the mixed category with Barti Bucher in 2011 and the women's division with Sally Bigham in 2012 - will also be taking up the challenge of the seven-day TransCape MTB stage race.

The 41-year-old, who loves South Africa, will be riding solo and says she’ll be using the February 7-13 race as training for this year’s Epic. Her fellow riders can be rest assured the primary school teacher won’t be taking it easy though.

She may, however, find stiff competition from two other international pro riders, Britain’s Catherine Williamson and Sharon Laws.

Among Williamson’s many bragging rights in SA alone are winning the women’s categories at the joBerg2C (three times) and taking the 2014 FNB Wines2Whales with different racing partners. Interestingly she’ll be teaming up with Suss for this year’s Epic.

Laws is also no stranger to the local mountain biking stage race scene. The British Olympic road racer and experienced mountain biker has the distinction of winning the women’s competition in the inaugural Cape Epic with Hanlie Booyens in 2009 and has raced in a myriad of conditions in events from Wales to China.

Among the local riders to look out for on the route which will see the field go from Knysna to George and then on to overnight stops in Calitzdorp, Riversdal, Swellendam, Greyton and Villiersdorp, before finally finishing at La Couronne Wine Farm in Franschhoek on Valentine’s Day, is Jan van den Berg.

After starting out in last year’s race as part of a team the 1980 Rapport Tour Champion ended up going solo, when his team mate had to withdraw injured after stage five, and went on to outshine Lingier and Rondelez, beating them in the final stage of the 2015 event.

Riding alone this time around the Krugersdorp legend, despite celebrating his 57th birthday on the penultimate day of the race, February 12, deserves respect and could cause a few upsets.

The tough as teak, Bonny Swanepoel, who finished fourth overall last year with her partner, Rene Schoeman, is also back and could be in contention for a podium finish riding on this occasion as a mixed team with the experienced, Martin Buck.

The two have done nearly 20 Epics between them and can’t be discounted as they take up the challenge of conquering this classic route, which will take the field over, amongst others, the beautiful Montagu Pass, Gamkaberg, a section of the Klein Karoo, the KangaKrusher, Garcia Pass, Groenlandberg and Franschhoek pass, first.

Belgium’s Niek Lingier who will be hoping to defend his TransCape MTB Race title when the 2016 race, which kicks-off in Knysna on Sunday morning (February 7), finishes seven days and 750km’s later in Franschhoek. He’ll be riding with compatriot, Jurgen van don Bron. (Photograph by Yolanda van der Stoep)
'We bring you the latest Garden Route, Klein Karoo, Hessequa news'
Posted on: 15:14 Thu, 04 February 2016