Telfer doubles up in Boland 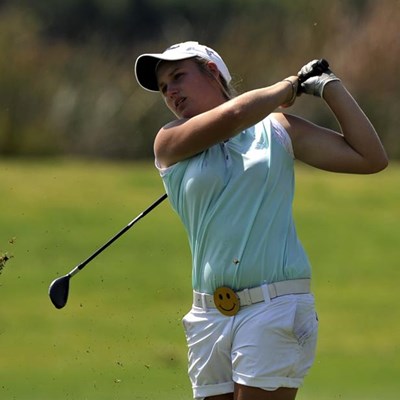 Kaleigh Telfer; credit Catherine Kotze / SASPA
NATIONAL NEWS - Kaleigh Telfer staved off a spirited final round challenge from fellow Gauteng junior Ivanna Samu to lift her fourth title this season at the Boland Championship at Worcester Golf Club on Sunday.
Telfer carded successive rounds of 68 to triumph on eight-under-par 136.
The 17-year-old Bryanston golfer lagged a stroke behind first round pacesetter Woo Ju Son, but finishes three strokes clear of Eagle Canyon’s Son, who signed off with a 72.
Meanwhile Samu started the final round well off the pace after an opening 74, but the 16-year-old Ruimsig golfer rallied with a superb 69 to claim sole third on 143.
Minette Oliver from Eastern Province finished in fourth on 146 with rounds of 72 and 74.
Telfer made her first visit to the winner’s circle in the Free State and Northern Cape Championship in April and claimed her second podium finish at the Southern Cape Championship in August.
The victory in Worcester followed on the heels of an eight stroke victory in the Ekurhuleni Championship a week ago.
“I am really happy to be back in winning form, but to be honest, I’m far more pleased with my scoring that collecting trophies,” Telfer said.
“At the Annika Invitational Europe and Girl’s British Amateur Championship it became clear to me that if you can’t contend if you don’t consistently break par.”
Telfer shot rounds of 66, 67 and 70 to win in George and followed two 73s at Benoni Country Club with a one under 71 in the final round.
“My main focus over the last eight weeks has been to play consistent golf,” she said. “I am working hard to avoid that one bad round that spoils the tournament. I want to get my game to a level where I can compete internationally with confidence.”
Meanwhile the chase for top spot in the Womens Golf South Africa Senior Rankings continues to excite.
Telfer, ranked second, has been stalking number one ranked Samu since the reigning Sanlam SA Women’s Amateur Stroke Play champion moved to number one in February.
Samu’s victory in the Nomads SA Girls Championship earned her a spot in the prestigious Duke of York Young Champions Trophy in England, so Telfer was able to capitalise on Samu’s absence to close the gap considerably at the Ekurhuleni Championship.
However, since Samu didn’t compete in last year’s Boland Championship, she comfortably retained the top spot with the third place finish, worth 11 points.
Telfer tied for second in the 2014 edition and thus only gained nine points for her victory.
The difference is 3.75 but the pair will only resume their rivalry in the season-ending Mpumalanga Championship at White River Country Club in November.
First Telfer and Samu will combine for Gauteng A at the South African Women’s Inter-Provincial at Centurion Country Club next week.
“Ivanna and I will be playing together and we will put all rivalries aside for the team,” Telfer said.
“We came agonisingly close last year at Royal Cape Golf Club, but we lost out to Western Province. After our winning performance at the 72-hole Teams Championship in East London, the team has worked tirelessly to prepare for this year’s SA Women’s IPT.
“Our only goal will be to help our team to finish the week on a winning note.”

Written and released by Lali Stander on behalf of Womens Golf South Africa.