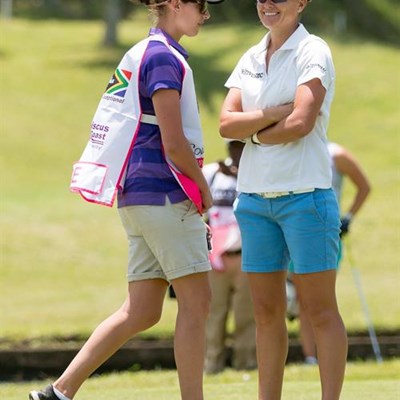 Lee-Anne Pace and Kim Williams; credit Ian Taylor
NATIONAL NEWS - She held the outright lead for two holes, but Kim Williams was still quite happy to settle for a share of the top spot with defending champion Lee-Anne Pace on the opening day of the SA Women’s Open at San Lameer Country Club.
The pair tied at one under 71 and Williams was smiling broadly as she posed for post-round photos with the tournament favourite.
“I had a nice little run out there, but I let it slip at the last two holes,” the 29-year-old Sunshine Ladies Tour champion said.
“I haven’t played a competitive round since the Investec Cup for Ladies in March, so I just tried to make a solid start. This result was completely unexpected and more than I hoped for.”
Despite a strong, swirling wind coursing over the stunning Hibiscus Coast layout, Pace and Williams played outstanding golf in the testing conditions.
No-one revelled in the challenge more readily than Pace, who got off to a flying start with back-to-back birdies and turned three under after another gain at nine.
“Unfortunately I misjudged the wind at 10, though, and hit it in the water,” said Pace.
“At 11, I hit a low five-iron, but it finished short of the green and I couldn’t up-and-down for par. I hit a poor shot into the green at 14 and dropped another shot.
“The holes into the wind on the back nine are really tough and I didn’t allow enough for the wind. I hit a great gap-wedge into 17 and birdied the par-five and finished with a solid par at 18.
“I’m actually really happy with this start and I’m looking forward to the next two days. It’s going to be fun to go head-to-head with Kimmie tomorrow.”
Williams overcame a nervous bogey start and a soft drop at five with five birdies in eight holes and overhauled Pace at 15.
“I birdied six and hit a wedge to three feet at eight and made the birdie to get back to level,” the GFG Academy member said.
“At 10, I hit a good tee shot into the wind and gap wedge to 12 feet and holed the putt to go into red figures for the first time. Then I holed a long downhill putt 11 for birdie to really get some momentum going.”
She bookended birdies at 14 and 16 with a bogey at 15 and sacrificed another shot at 17 after duffing a chip. Playing the final hole with a one shot lead, she hit a solid drive, but her approach drowned in the water guarding the island green.
“I knew I was in trouble when I hit the shot, because I didn’t commit,” she said.
“That’s golf for you – it gives and it takes away. I felt great walking off the course with a sub-par round, though, and playing with Lee-Anne is always a treat. She is great fun and she always forces you to lift your game, so I’m looking forward to the tussle on Monday.”
English golfer Anna Scott finished four off the pace, while Sunshine Ladies Tour winners Monique Smit and Nicole Garcia tied for fourth on 77.
Amateurs Lejan Lewthwaite and 14-year-old Woo-Ju Son returned 78s join reigning Sanlam SA Women’s Amateur champion Carrie Park from Korea in sixth place.