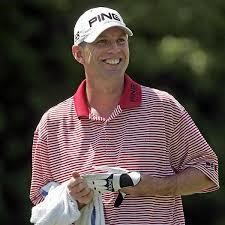 Kevin Sutherland
INTERNATIONAL NEWS - Kevin Sutherland joined one of golf's most exclusive clubs on Saturday, firing a 59 in the second round of the Champions Tour tournament at En-Joie Golf Club.

Sutherland became the first to shoot golf's magic number on the tour for over-50s, with a 13-under par round that included 12 birdies, one eagle and one bogey.

The bogey came at the final hole of the par-72 layout. His six-footer for par slid by the cup -- ending his bid for a 58.

That would have been a first in an event sanctioned by the US PGA Tour, which runs the Champions Tour.

Sutherland, whose only PGA Tour victory was at the 2002 World Golf Championships Match Play Championship, had seven birdies and an eagle in his first eight holes and admitted he was thinking 59 even before he reached the turn.

"When I was nine-under after eight, I was like that goes beyond being a good start," Sutherland said. "At that point, I started thinking what do I have to do to shoot 59?

"So I started thinking maybe earlier than you should be, but it worked out all right."

Sutherland made par on No. 9 to set the tour record for lowest score in relation to par for nine holes.

Around the turn, Sutherland birdied 10 and 11 to keep his hot streak going.

Sutherland birdied 15, then drove the green at the short par-four 16th and two-putted for birdie.

He made a two-foot birdie putt at the par-three 17th, but at the last he was in the trees off the tee and couldn't get up and down.

Sutherland had a 14-under two-round total of 130, one shot ahead of Steve Lowery.

He said his round carried over the momentum that began building late in his round on Friday.

"Today, early on, I was just making everything," he said. "I made some great long putts.

"I got lucky on seven, holed a bunker shot that was kind of screaming across the green. I guess you have to have a couple of those to shoot 59, but for the most part I hit the ball really, really well and I made a lot of good putts."

Only six players have posted 59s on the US PGA Tour, the most recent Jim Furyk at the BMW Championship in Chicago last September.

In 2010, both Paul Goydos and Australian Stuart Appleby achieved the feat. David Duval, Chip Beck and Al Geiberger have also done it.

Prior to Saturday, Sutherland's best round in competition was a 62 at the 2010 Canadian Open.