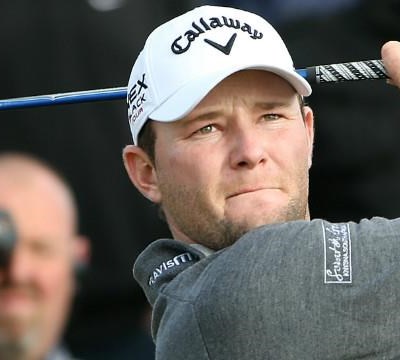 Branden Grace
NATIONAL NEWS - Branden Grace was the sure favourite going into the week of the Dimension Data Pro-Am. Not only did he pick up a sixth European Tour title at the Commercial Bank Qatar Masters one month ago, but this week he was playing on home soil at Fancourt.

When it came to the crunch on Sunday the 26-year-old produced the goods with birdies at the 12th, 14th and 16th to secure a two-shot victory over Keith Horne.

“The wind really blew out there today, sometimes it was up to three clubs,” said Grace. “I knew it was going to be a grind and you needed to keep calm. I managed to do that today and I was fortunate to end up at the top of the leaderboard.”

The R4.5-million tournament puts the professionals to work with a round at each of Fancourt’s Montagu, Outeniqua and The Links courses. After 54 holes there is a cut and then a Sunday round played on Montagu.

The final 18 was a trying affair and Grace made double bogey at the first. He fought his way back to level par by the turn and went on to complete the stretch in two-under-par 34 and set the clubhouse target at 11-under.

“That caught me off guard. Starting off with a double is not the easiest thing to get through your mind. You really want to start pushing it, but that’s what leads to bogeys. I knew it was going to be a tough day and you just had to stay patient out there,” he said.

The PGA Tour headed to Riviera Country Club this week, where Retief Goosen’s putting was as hot as ever. The two-time major champion led by two shots going into the final round, but he failed to seal the deal on Sunday and carded 75 to share third place.

“I’m kicking myself, that’s for sure,” said Goosen. “That was an opportunity missed, and we’ll move on. It won’t be a nice pill to swallow, but that’s just the way this game is.

“Something positive to take to next week, but also something negative. I would have rather gone into next week with a win, but I can just continue to work away.”

The European Tour held the Hero Indian Open this week, where local Anirban Lahiri clinched a playoff victory over SSP Chawrasia. Brazil’s Adilson da Silva, a veteran of the Sunshine Tour, finished up the week at Delhi Golf Club on two-under-par for a share of 12th place.