The goals were scored by Phakamile "Eto" Someleze (2) and Siyabonga Sizani for Young Pirates and Ayabulela Jantjies and Mzovuyo "Zorror" Maduna for Black Cats Geolfa.

Young Pirates scored two brilliant quick long-range goals in the second half to clinch their victory.

The first half was dominated by Young Pirates who were constantly on the attack, hardly giving the home side, Black Cats Geolfa, a chance to get on the ball. Black Cats Geolfa started the game in the centre of the field trying to unlock Young Pirates' back line. Black Cats Geolfa received a penalty in the first twenty minutes after Siphensthi "Tower" Khonono made a reckless tackle against their striker Yibanathi "Majoro" Mtsi inside the box.

Ayabulela Jantjies converted the penalty to make it 1-0. Young Pirates made the most of their strength, which is keeping the ball on the ground with short passes, to break through Black Cats Geolfa's back line.

Young Pirates made two attempts at a goal, one from a penalty and the other a free kick just outside the box, but failed to convert. Phakamile "Eto" Someleze and Siphelele Booi were chasing the game trying to create chances for Young Pirates. Fanele Chele of Abahlali chases the ball against Wongekile Bhukuza (in red) during the quarter finals on Saturday.

Black Cats Geolfa lanky striker Yibanathi "Majoro" Mtsi received a beautiful pass played in from the centre of the field, but his powerful strike went over the crossbar. Pirates launched a strong attack from the centre of the field. It was picked up by Someleze Phakamile who scored their first goal to make it 1-1. Young Pirates kept up the pressure.

A strong attack by their back, Yonela Mapapa, was denied by Black Cats goalkeeper William Daniels. They were also awarded the first corner of the game but failed to break the net. Sivuyile "Bhanyo" Ndiwa of Black Cats got a golden chance, but shot straight at Young Pirates goalkeeper "Qhamani Zondani". Siphelele Booi delivered a beautiful cross inside the box but it was well defended by Black Cats. 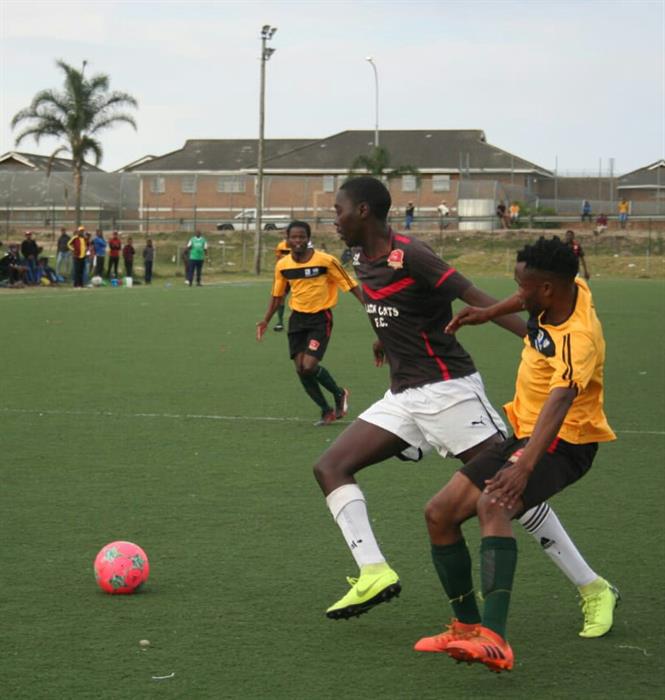 Black Cats launched an attack on the right side of the field with Zovuyo Maduna on the ball, but he hit the side of the net. When the half time whistle blew the score was 1-1.

The second half started energetic with both sides creating chances. Young Pirates received a corner but failed to convert. Black Cats Geolfa player Zovuyo Maduna used his pace to beat Young Pirates defenders but his side missed the target. Phakamile Someleze scored the second goal for Young Pirates to make it 2-1 with a long-range shot just outside the box.

Both teams were fighting for a goal. Siyabonga Sizani scored Young Pirates' third goal, driving a beautiful long-range shot just outside the box. Goalkeeper William Daniels was exposed when he failed to stay his ground. With the score 3-1 against them, Black Cats Geolfa came back in full force with offensive play. Zovuyo Maduna scored their second goal, his powerful strike beating Qhamani Zondani, Young Pirates' goalkeeper, in the dying moments of the game. Black Cats Geolfa pushed for the equaliser, causing Young Pirates defenders to panic, but it was too late and the final whistle blew to a score of 3-2.

Speaking to Idinga after the game, Young Pirates head coach, Siyabonga Zitofe, said the Geolfa League had shown them that Black Cats Geolfa is one of the most difficult opponents. His game plan was to use physical strength up front to create more chances for his side.

"Black Cats scored first, but as a team we all knew that we will come back and hit them badly because we had a better team with more experience," he said.

"Yes, there were times when they were coming hard at us but as a team we're prepared for any challenge and we wanted more than Black Cats' second team." Young Pirates were crowned champs of the Mayor's Cup and took home the trophy, gold medals and a cash prize. Photos: Zama Gagu