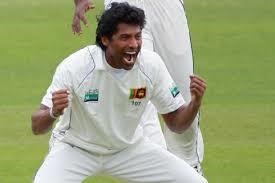 Sri Lanka's left-arm seamer Chanaka Welegedara
INTERNATIONAL NEWS - Sri Lanka's captain Angelo Mathews won the toss and elected to bat in the second Test against Pakistan in Colombo on Thursday, the final one for the home team's retiring Mahela Jayawardene.

Sri Lanka made two changes from the side that won the first Test in Galle by seven wickets to take the lead in the two-match series.

Pakistan left out lanky fast bowler Mohammad Talha to play left-arm seamer Wahab Riaz in what are expected to be good batting conditions at the Sinhalese Sports Club.

Former captain Jayawardene will quit Test cricket after the match, but will continue playing one-day internationals until next year's World Cup in Australia and New Zealand.