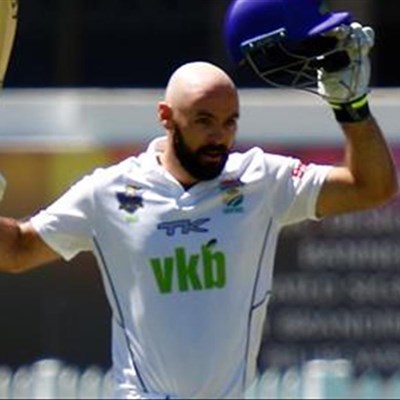 Rudi Second of the Knights got to 200 on day 2 of the Sunfoil 4-Day Series match between WSB Cape Cobras and VKB Knights. Photo: Michael Sheehan/Gallo Images

SOUTHERN CAPE NEWS - No play was possible on the final day of the Sunfoil Series clash between the WSB Cape Cobras and the VKB Knights at the Recreation Ground in Oudtshoorn on Monday 9 October.

Heavy rain and a wet outfield at the start of day four left umpires Shaun George and Arno Jacobs little choice. Almost the entire final session was lost on day three when the visitors had just begun their second innings and had reached three without loss, a lead of 45.

Rudi Second hit an unbeaten double century for the Knights who, after winning the toss and electing to bat first, made 489/5 and declared.

Justin Ontong (64 off 92 balls, 9 fours) and Aviwe Mgijima (63 off 92 balls, 7 fours, 1 six) put on 109 for the fourth wicket and half-centuries by Kyle Verreynne and Dane Piedt ensured that the two sides were evenly positioned after the third day. The pair put on 105 runs for the seventh wicket to ensure the hosts finished within 42 runs of the visitors' 489 for five declared, before they were bowled out for 447.

The Cobras resumed the third morning on 281 for five, with Verreynne going on to make 85 (170 balls, 6 fours) - his highest score in franchise cricket. Piedt, meanwhile, made 62 (120 balls, 8 fours) to further help close the gap between the two sides.

They were eventually dismissed in 129,2 overs with Ottniel Baartman picking up three for 79 and Marchant de Lange bagging three for 95.