Steenhuisen said that Mashaba resigned in fear that his own caucus would pass a motion of no confidence in him.

This was flagged by Mashaba on Sunday following a report by the Sunday Times where Steenhuisen accused Mashaba of “dancing to the tune” of the Economic Freedom Fighters (EFF) during his tenure as the Mayor of the city of Johannesburg.

Steenhuisen accused Mashaba of failing the DA while he was the party’s Johannesburg mayor.

“The Mayor naively at times felt that if he just threw a few scraps to the crocodile it would be happy,” Steenhuisen told the newspaper.

Mashaba labelled the allegations at libellous.

“His remarks are libellous and our legal team will address this with him directly,” tweeted Mashaba.

“His dishonesty is proven by his amnesia that it was he, and not I, that was one of the many who voted for the arrangements which depended on the EFF in the coalition.” 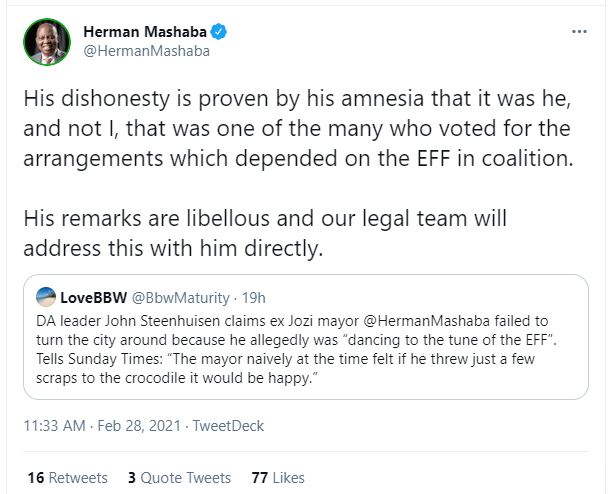 He went on to say that Mashaba resigned because of the fear that his own caucus would pass a motion of no confidence in him.

He accused Mashaba of treating his caucus with complete disdain and that coalition partner were aggrieved that the EFF had privy details to meetings before they would be held.

Steenhuisen told the paper that his party was ready to govern in coalition with the African National Congress (ANC) under the leadership of Ramaphosa. He said that they were ready to oppose any motion on no-confidence brought to parliament by opposition parties against Ramaphosa.

While at that he also took a swipe at former party leader Mmusi Maimane saying that the party under his leadership lost its identity which resulted in poor performance in the 2019 national elections.

“People didn’t know who we were, what we were standing for and what the DA  was trying to achieve,” he said.

“DA tried to focus too much on the tricks shots rather than getting the messaging right. The messaging was diffused.”

This too did not go down well with Maimane and he took to Twitter his response in a series of tweets.