Truck with 700 bags of cement ploughs into 17 cars

NATIONAL NEWS - A 43-year-old man was arrested yesterday, Tuesday, 25 February, and charged with reckless or negligent driving after ploughing into numerous vehicles with a 30-ton truck and trailer.

A total of 17 cars were severely damaged and at least seven people were injured, including a nine-year-old boy, who all were rushed to various hospitals following the disastrous accident.

Johannesburg Metropolitan Police Department (JMPD) spokesperson, Wayne Minnaar, who confirmed the arrest of the driver, said the driver alleged that the brakes of the truck had failed.

However, according to onlookers, his excuse wasn’t acceptable as he had ignored the five-ton prohibition sign at the top of the hill.

His careless action resulted in the truck carrying about 700 bags of cement to jackknife and plough into the other vehicles, while shedding its load and damaging a property wall adjacent to the Ruimsig Shopping Centre.

Emergency services worked until late to clear the cement that covered the road. The corner of Doreen and Malcolm Roads remained cordoned off, which severely affected traffic yesterday and this morning.

Anna Lewis said: “Why are trucks driving on that road? Really hope authorities wake up and do something. How many more lives must be claimed? So sorry for everybody involved.”

JD Holtzhausen added: “Really again. Why can’t we ban trucks on that road?”

Christo Venter reckoned hefty fines would solve the problem: “Metro should fine every truck travelling on Doreen at least R500,000; the word will spread quickly.”

Lastly, Mpho Kotoane-Gupta said it was high time truck owners got charged with their drivers because they forced them to drive these unroadworthy trucks. 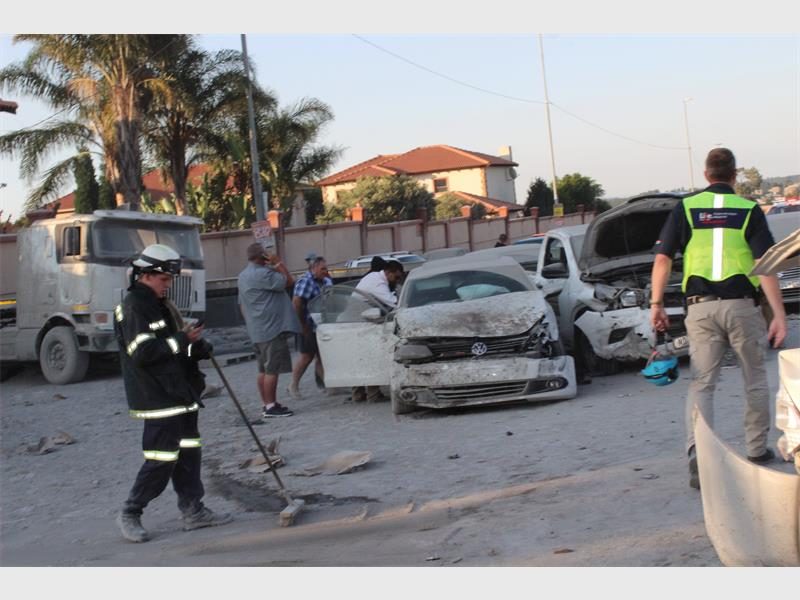