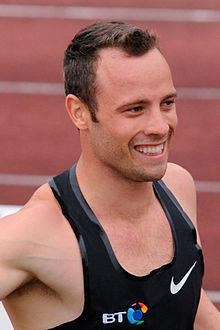 Image: en.wikipedia.org
NATIONAL NEWS - Oscar Pistorius’s legal team has contended that the Constitutional Court should grant the paralympian leave to appeal the Bloemfontein Supreme Court of Appeal’s judgement “in the interests of justice”.

In papers filed on Monday, a member of Pistorius’s legal team, Andrew Fawcett, said the SCA judgement “rests on three errors of law”.

Pistorius was found not guilty of murder on September 12, 2014 for shooting dead his girlfriend, Reeva Steenkamp, through a locked bathroom door on Valentine’s Day the previous year. Instead, he was found guilty of culpable homicide.

In October last year he was released to live under house arrest after serving one year of a five year sentence.

The State, however, appealed the culpable homicide conviction and sentence, and in December last year the Supreme Court of Appeal handed down a unanimous judgement setting aside that conviction and sentence and replacing it with murder “with the accused having had criminal intent in the form of dolus eventualis”.

The matter was referred back to the trial court for a new sentence to be considered.

But, Pistorius’s last ditch attempt to stay out of jail is now in the hands of the Constitutional Court.

The Directorate of Public Prosecutions (DPP), the respondent in this fresh application, have ten days to respond in writing, indicating whether the application is being opposed, and “if so on what grounds”.

In the papers, Fawcett argues the application for leave to appeal has two main bases – that the SCA “exceeded its limited jurisdiction” and that it acted “unlawfully and unconstitutionally when it rejected the factual finding of the trial court and replaced it with a contrary finding of its own”.

Fawcett further contends that the “SCA’s exceeding of its jurisdiction in this regard goes to the very heart of its decision that the applicant was guilty of murder”.

He argues that if the SCA had adhered to the factual findings of the trial court, “it would necessarily have concluded that the requirements of putative private defence were met and that accordingly no murder conviction could follow”.

The papers also detail the second basis of the proposed appeal, arguing that the SCA judgement rested on “three errors of law”.

The papers further state that the dolus eventualis finding did not take into consideration whether Pistorius had acted with the “requisite knowledge of unlawfulness”.

And, Fawcett contends that the SCA also “reintroduced the defunct presumption that an accused intends ‘the natural and probable consequences of their actions’ when it (impermissibly) reconsidered putative private defence”. This too was an error of law, he argues.

The trial Court found that Pistorius had genuinely, but erroneously, believed that his and Steenkamp’s life had been in danger and that he had never intended to kill the person in the toilet cubicle.

Fawcett says the SCA found that this point was argued, but he says it was “a factual finding by the trial court” that was ignored by the SCA.

He also points to Pistorius’s “compromised state of mind” and argued that when his version is considered this must be taken into account at the time of the shooting as well as when he gave evidence as a consequence of the incident.

Fawcett also objects to the SCA introducing the “rational person” test and finding that although Pistorius may have been anxious “he fired without having a rational or genuine fear that his life was in danger”.

He also accuses the State of exploiting Pistorius’s “compromised state of mind” by, among others, cross-examining the applicant “in a combative and aggressive manner” for seven days, by showing him a photograph of Steenkamp’s wounded head and insisting he look at it, as well as calling him a liar on several occasions.

The DPP has until January 21 to respond to the papers.

The Constitutional Court still has to given an indication of whether it was prepared to hear the appeal.