"Lesego was an inspiration" 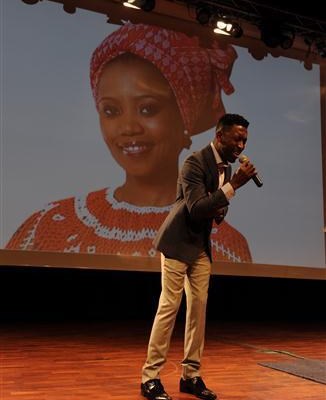 Joel Zuma sings Josh Groban's 'You Raise me Up' at the memorial service of South African actress Lesego Motsepe, best known for her role in television soapie Isidingo, in Johannesburg on Thursday, 23 January 2014. Motsepe was found dead at her Randburg home at around 11 am on Monday. On World Aids Day in 2011, the actress disclosed that she had been living with HIV since 1998. Motsepe was 39 years old. Photo: Werner Beukes, Sapa
NATIONAL NEWS - Actress Lesego Motsepe was an inspiration to people living with HIV, the Young Communist League of SA said on Tuesday.

"She went public with her status in order to help others who are either infected or affected by the virus," YCLSA spokesman Khaya Xaba said in a statement.

The 39-year-old died of natural causes on Monday, her family said. Her body was discovered by her brother Moemise Motsepe around 11am at her home in Randburg, Johannesburg.

"We hope that our young people realise that HIV and Aids are a reality and that no one is immune from the disease. It can infect and affect any person irrespective of their standing in society," she said.

"We commend her for her enormous contribution to this course and we further hope that she has inspired other actors to go an extra mile in ploughing back to their communities with their God-given talents," Sunduza said.

SABC spokesman Kaizer Kganyago said the broadcaster was proud to have contributed to nurturing Motsepe's talent.

"We saw Motsepe's talent flourishing at an early age as she featured on many productions including the teenage drama, 'Dynamite Diepkloof Dudes', and from then onwards she blossomed into the great performer she was," Kganyago said.

He said her work would inspire and challenge aspiring performers.

"She was very helpful anytime we needed someone who can partake in our youth outreach programmes to motivate young ladies to lead positive and determined lives," Masuku said

He passed condolences to Motsepe's family and friends.

"Their grief is our grief," Masuku said.

Motsepe will be remembered for her role as Letti Matabane in the soap opera "Isidingo". She was part of the cast from 1998 to 2008.

Motsepe announced her HIV-positive status on World Aids day in 2011, and became an Aids ambassador.