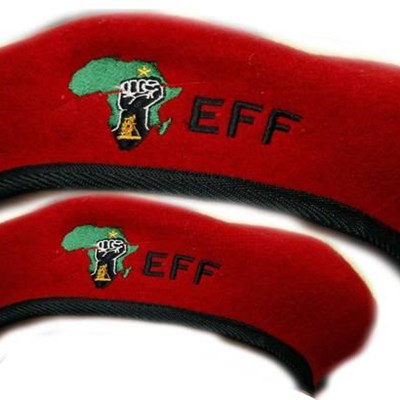 NATIONAL NEWS - Parliament awoke to the sights and sounds of the Economic Freedom Fighters on Wednesday morning.

Male EFF MPs, dressed in red overalls and hard hats, sang and danced in front of the steps of the National Assembly where they were expected to be sworn-in later in the morning.

Most female EFF MPs chose to dress as cleaners in red dust coats with aprons, and brightly coloured headscarves.

New EFF MP Magdalene Moonsamy said she was excited to be in Parliament.

Moonsamy, unlike her EFF colleagues, wore a red skirt and red knitted top.

Explaining the symbolism, EFF MP-in-waiting Floyd Shivambu said: "The working class and poor now know they've got representatives in Parliament. There is no other organisation which associates itself with the struggles of the poor."

Unlike during election campaigning when EFF members wore overalls displaying the party's name, Wednesday's uniforms were bare of party insignia.

Parliament has said MPs should observe the decorum of the House by not displaying party political insignia during sittings.

MPs from other parties walking into the National Assembly building chose the traditional suit and tie, or dress suits for women, for the swearing in ceremony, due to start at 10.30am.