Backlog of 1000s in Covid testing

NATIONAL NEWS - A backlog that has developed during May in Covid-19 testing in South Africa is due to a worldwide shortage of reagents, chemicals needed in the testing process, according to National Health Minister Zweli Mkhize.

The backlog had increased from 49 550 unprocessed on 9 May to 58 930 on 14 May and 101 007 on 21 May. Mkhize said the number of tests conducted compared with the specimens collected but not yet processed, fluctuates on a daily basis.

"This is being caused by a worldwide shortage in reagents needed to conduct the tests. We engage suppliers all over the world and have issued licenses through Sahpra (South African Health Products Regulatory Authority) as part of mitigating this capacity challenge."

While specimens to test for Covid-19 are being collected from the community screening campaign, priority is currently given to processing specimens from patients who are admitted to hospital and health care workers, said Mkhize. 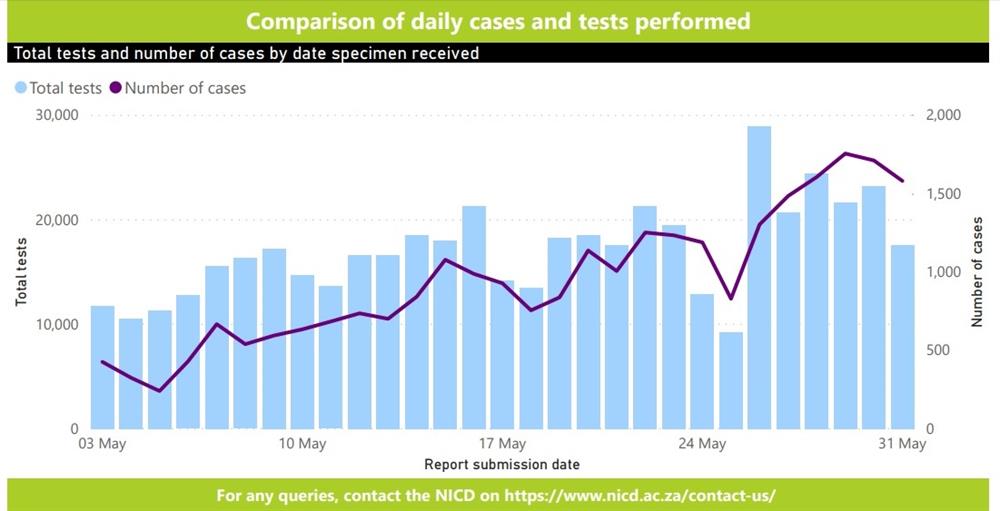 This graph from the National Institute for Communicable Diseases (NCID) shows how the number of tests performed varies daily.

Concern over delay in test results
The Western Cape Health Department has also been prioritising certain tests, leading to a backlog of 18 000 tests at one stage last week. There has been an increase of 400% in the number of tests conducted in the province since 25 April. Premier Alan Winde has expressed concern over the effect of the delay in receiving results and said prioritising tests is currently the most efficient way of managing the curve of the disease.

On Monday 1 June, 17 617 tests had been conducted in the previous 24 hours. Mostly, about half of tests are done by the NHLS labs and half by the private sector.

The number of tests increased steadily from the beginning of May when about 10 000 tests were conducted per day. Around the middle of May, this increased to about 20 000. The figures fluctuate and in some instances there has been a drop of as many as 7 000 tests in a day.

The National Health Laboratory Services (NHLS) said in a statement it has placed orders with their suppliers to meet their testing capacity of 36 000 tests per day. "However, we are only receiving limited quantities when the suppliers have them available. The NHLS continues to engage with international suppliers to expedite the delivery of the test kits. The NHLS is on average conducting 60 000 tests per week with the kits we have available. We have adequate kits for PCR machines, but the limiting factor is the extraction kits."

Testing process
The NHLS explained the testing process as follows: The NHLS uses a range of testing machines. The testing process requires two steps: firstly, the RNA of the virus is extracted from the swab, and the RNA is reverse-transcripted into DNA (this is called extraction).

The second part of the process is the amplification of the DNA in a machine that does polymerase chain reaction (PCR). Once amplified, the DNA can be analysed to determine if there is Sars-CoV-2.

The Cepheid GeneXpert and the Roche Cobas 6800/8800 are examples of integrated machines that are able to do both the extraction and PCR process in one automated test. The PCR machines that do not have their own extractor are Abbott M2000, BioRad CFX, QuantStudio and Roche Light Cycler. Separate extractors (Nimbus and EasyMag) have been procured to extract the RNA from the virus before it can be put into the PCR machines for amplification.