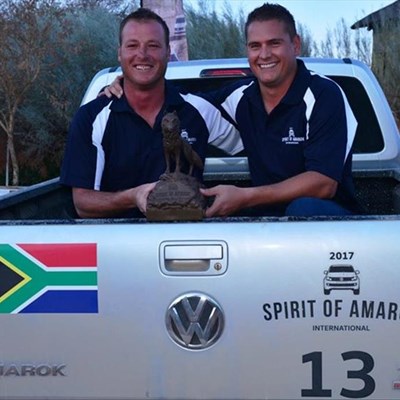 Team South Africa walked away with these bragging rights as well as the R60 000 main cash prize. The championship took place in the Kalahari desert from 13 to 19 August.

The South African duo, Juan Grant and Marius Henn, came out tops against stiff competition from 20 other teams from Australia, Botswana, Germany, Namibia, Russia, South Africa and the United Kingdom. Grant and Henn received the coveted Wolf Trophy. (Amarok's namesake is the giant wolf in Inuit mythology). The contestants were put through their paces by the judges, one of who is the legendary Sarel van der Merwe.

Each participating country was represented by three teams who showed their off-road driving skills in the unrelenting dunes and pans of the Kalahari Desert, which was referred to by one of the international competitors as "orange ice".

At the end of the four-day competition, Team South Africa had amassed 7 212 points to take the gold medal, followed by Team Namibia claiming silver with 6 246 points and Team Russia earning bronze with 4 797 points.