The Nissan Patrol has been an off-road icon since its conception in Japan in 1951. It has developed a reputation as a rough and ready off-road vehicle that uses dependable mechanics and its four-wheel-drive system to conquer terrain. 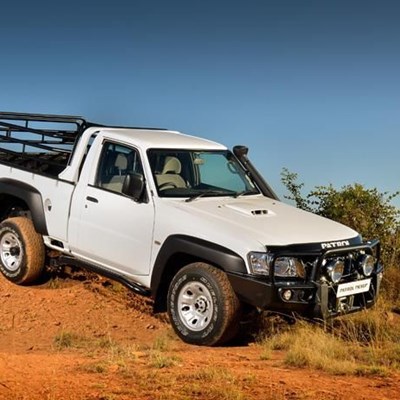 The updated Patrol Pick-up is soon to be available in South Africa. It now sports sharper looks, a new diesel engine and upgraded features. The Patrol nameplate has been going for 60 years and the new Patrol Pick-up builds on this heritage. It’s an authentic 4x4 which represents Nissan’s commitment to the large pick-up segment in South Africa.

“The new Nissan Patrol Pick-up is an exciting addition to the Nissan LCV stable,” comments Terry Mashoko, LCV Product Manager at Nissan South Africa. “The Patrol nameplate carries a rich heritage the world over and in South Africa has come to signify the toughest bakkie for the most demanding applications. With its new, powerful common rail diesel engine, it’s loaded with the never-say-die attitude which gives it legendary status in the large bakkie segment,” he adds.

The bakkie is available in single-cab configuration, with a diesel-powered 4x4 drivetrain and a five-speed manual transmission. The engine itself is a 3.0-litre 16 valve turbodiesel that has seen improvements made to its filtration, efficiency and durability. It now produces 110kW/371Nm. Claimed fuel consumption figures are 10.9 litres/100km with two fuel tanks totalling 175 litres for extended range (up to 1 600km). The engine is also compatible with high-sulphur diesel meaning trips to Botswana, Namibia, Zambia and Mozambique will be possible.

The 4x4 system helps the Patrol tow a claimed 2 500kg which puts it among the best in its class. The 4x4 system is a part-time setup and the driver has the choice between three manually-activated drive modes depending on the conditions. A rear differential lock comes as standard as does a low range setting with manual hub locks and a manual override system for the gearbox.

There are also wider tyres for improved grip, as well as a widened rear track which better aligns the front and rear wheels for improved stability and control off-road driving conditions. The rear leaf spring suspension design has a longer stroke on the springs aimed at improving ride quality and comfort.

There have been a number of upgrades inside, to improve comfort and convenience. There is now air conditioning, power steering, a tilt-adjustable steering wheel, electric windows and intermittent windscreen wipers. Safety equipment includes two airbags, three-point safety belts and ABS with the ventilated front disc brakes.

The Patrol Pick-up is available with a range of accessories including spot lights, cattle rails, replacement bumper, winch, snorkels and audio system along with many others, allowing owners to customise their Patrol Pick-up to suit their requirements.

The Nissan Patrol Pick-up comes with a 3-year/100 000km warranty. Local pricing is to be confirmed closer to the model’s introduction.