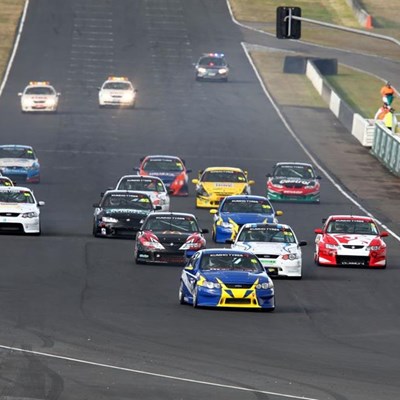 (Generic image)
MOTORING NEWS - The programme to launch an African version of Australian V8 Touring Car racing in this country is fully on track.

The design of a prototype car has been completed in Australia, with the first complete unit built. The vehicle will leave Australia in May to undergo a series of track tests in South Africa.

Production of at least 16 customer cars will proceed during the course of the year, with a maximum of 20 envisaged for the 2014 racing series.

Provisional orders have already been placed for a number of cars, with delivery expected to start in November this year.
The cars will sport the very latest version of Australian V8 Touring Car technology based on the Australian version of their 'Car of the Future'. The vehicles will be identical in technological terms, using the same chassis, suspension, gearbox, brakes, roll cage units and tyres.

All the above components will be strictly controlled, while the chassis has been designed to accept various manufacturers' body shells, as dictated by customers. Shells representing Ford and Audi are already on order from local customers.
All the cars will sport V8 engines producing a strictly controlled 410kW of power and the competing vehicles will all weigh exactly the same.

This year will be used to establish and test the cars on local circuits, while a racing series should be launched by March 2014. Local VMP Race team boss and engineer Vic Maharaj has confirmed that he will be running cars in the series.
"This is the formula that South African motorsport has been waiting for," Maharaj said. "I have known chief designer Paul Ceprnich since we worked together on local Super Touring cars in the 90s.

"He is a brilliant engineer, who has since been involved with projects like BMW's Le Mans winning sports car."
Maharaj added Ceprnich was responsible for the design of the current Australian V8 Supercar. His design, heading for the South African series, was nothing short of "world class".

"With each car ordered comes a franchise to run it in the series," Formato said. "Only 20 franchises will be sold in 2014, with the number likely to expand in the next year."