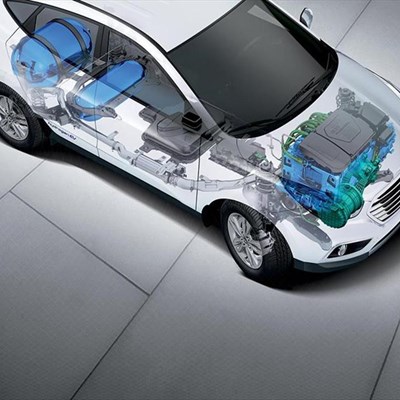 MOTORING NEWS - As the burning of fossils fuels is nearing its final conclusion, Hyundai has become the leading car manufacturer investing in and developing hydrogen fuel cell technology.

An electric motor powered by hydrogen has a far greater range than traditional electric vehicles (EVs) and converting hydrogen into electricity produces only water and heat as a by-product, which eliminates tailpipe pollution.

A fuel cell is a device that generates electricity through a chemical reaction.

Each fuel cell has two electrodes, one positive and one negative, named the anode and cathode.

Electricity is produced at the electrodes and each fuel cell also has an electrolyte which carries electrically charged particles from one electrode to the other.

A catalyst accelerates the reactions at the electrodes and water is created as a harmless by—product.

Various manufactures have considered hydrogen powered cars, but Hyundai is the first automotive manufacturer that started mass production from beginning of 2013 in Ulsan, Korea.

The fourth generation hydrogen powered car from Hyundai since1991, the ix35 (now the Tucson) converts hydrogen to electricity, which then powers the car that has a range of 600km.

This is opposed to the burning of hydrogen as an alternative to gasoline, like BMW did with its internal combustion hydrogen cars.

An electric motor generates 100kW which propels it to reach a top speed of 160km per hour. Hydrogen vehicles are considered much safer than petrol-engined cars, as the fuel is stored in incredibly well-armoured tanks which, if overheated, vent the hydrogen into the atmosphere where it shoots up, as opposed to petrol that pools on the ground.

Some hydrogen refuelling stations use electric power generated by wind turbines, making this the cleanest form of renewable energy available.

No carbon dioxide, no smog, no poisonous gases, or dirty particles are released into the air.

Hydrogen is unlimited and electricity generation is becoming cheaper with the compound growth of new green technology.

Refuelling a hydrogen cell vehicle takes four minutes - and due to the low cost fuel production, some leases even include refuelling cost!

During the past two decades Hyundai has been the leader in hydrogen vehicle development and the mass-produced ix35 Fuel Cell (FCEV) is on sale in 17 countries around the world.

Major progress has been made in rolling out Hyundai’s fuel cell vehicle in many European cities, like the car sharing program of Linde in Germany, or the Paris-based electric taxi start-up where both use the ix35 FCEVs as taxi and car sharing vehicles.

Beginning in Bergen, Norway, Hyundai Motor undertook the longest road trip with fuel cell vehicles across Europe, covering 2 500km with the ix35 Fuel Cell, using only the existing fuel cell station infrastructure to power their way to Bolzano in Italy.

Over 140 Hyundai fuel cell vehicles have been delivered in Southern California, USA since June 2014 and nearly 50 hydrogen refuelling stations are operation in the state.

Hydrogen stations in Europe have increased significantly and Germany alone plans to have close to 400 hydrogen refuelling station by 2023.

The ix35 Fuel Cell is a key part of Hyundai Motor Group’s vision to remain a leading environmentally-friendly car maker.

By offering a choice of alternative powertrains – hybrid, electric, and plug-in – they are well placed to continue the leading role in sustainable mobility.

Hyundai Motor and twelve other industry leaders launched the Hydrogen Council in Davos earlier this year. The council aims to expedite society’s transition to hydrogen-powered mobility.

By 2020, 14 new eco models will be launched, which will place Hyundai far ahead of any competitors.

A new ix35 fuel cell vehicle that will be launched next year is capable of travelling over 800km before refuelling.

Such an impressive range represents a major step in creating a hydrogen-based zero-emission society without the usual market inhibitor of "range anxiety".

The growing aspirational appeal of Hyundai is fostered by technology and significant investment into eco vehicle design, which appeals to sophisticated, "green", technologically aware consumers.

Once this becomes generally available, we can look forward to a greener planet and lower hydrogen mobility costs as we embrace this remarkable technology.

Rubin van Niekerk has been a member of the South African Guild of Motoring Journalists since 2002, and a Car of The Year Jury member from 2011.