THE HONDA CRF250R has always set itself apart from the rest of the 250 four-strokes on the market by virtue of its unique twin-exit exhaust system. 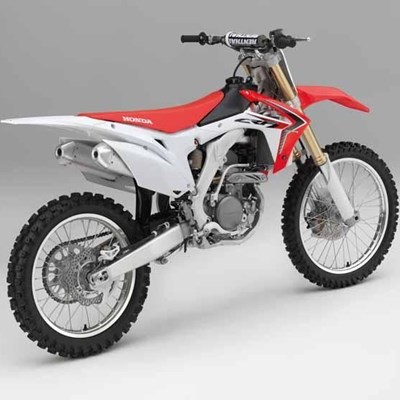 The good news is that the unique exhaust system will remain a feature in the 2014 model. The outgoing model achieved notable success in the US Supercross Lites series over the past two years.

The new machine features a number of changes. There is the same mass-centralised aluminum beam frame as seen on the current CRF450R. This lightweight frame and engine contribute to a low kerb weight of 106.2kg.

The chassis is said to lower the bike’s centre of gravity thanks to a lower intersection point for the steering head and main-frame spars. The suspension has received attention in the form of internal improvements to the Showa front fork as well as a new Pro-Link suspension along with a redesigned swingarm.

The liquid-cooled four-valve Unicam engine has received a number of updates. The engine has had work done on its PGM-FI fuel-injection mapping along with Dual Injector timing and a revised injector angle. The compression ratio is increased from 13.2:1 to 13.5:1 thanks to a higher compression piston and reshaped cylinder head, as well as improved inlet/exhaust porting.

The result is an impressive 28kW developed at 11 000rpm and a torque figure of 26.4Nm at 8500rpm. The five-speed gearbox has been revised to improve durability. Power and torque improvements have been focused on the all-important low- to mid-range. A CRF450R specification airbox has been paired with a dedicated CRF250R air boot.

Styling cues have been lifted from the outgoing CRF450R and enhanced for the newer bike. The radiator shrouds, side covers, narrower seat and fuel tank are said to provide improved rider comfort while maintaining a fuel capacity of 6.3 litres. The body work has been made more rigid so as to provide the rider with more grip when they change position.

Lightweight 80/100-21 front and 100/90-19 rear tyres save unsprung weight. The two-piston caliper front and one-piston caliper rear brakes (both 240mm) are shielded, the front by a two-piece cover.