Fiery fate of a Lamborghini 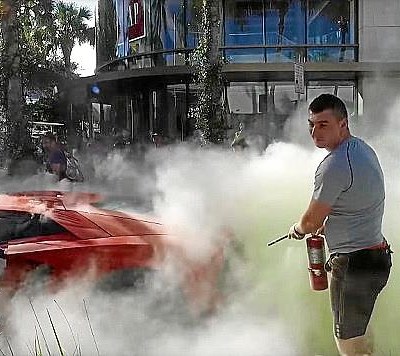 Helpers on the scene managed to put the fire out.
MOTORING NEWS - Acting on that adventurous impulse can be a really bad idea: as a parking valet found out in Miami, Florida, recently.
He took a Lamborghini Aventador for a quick spin when he should have been parking it sedately and now there's no hiding the facts.
Tempted beyond his ability to control a supercar, a valet in Florida simply couldn't help himself after a customer handed him the keys to park a shiny $400 000 Lamborghini Aventador with a V-12 engine.
Of course, when you don't get handed the keys, it is easy to see how wrong it was to take a customer's car for a joyride. That apart, insurance is bound to get sticky and the valet's employer and the employee himself are probably responsible if something happened to a vehicle while in their possession.
The whole incident in front of a mall on Lincoln Road in Miami Beach's South Beach neighbourhood was capture on video and went viral. People on the scene eventually put out the fire but the damage was done. The car was out of commission and had to be pushed away from the scene. The fire took hold when the engine was over-revved.
Source: Fox News