The new Volvo range at the V&A Waterfront.

MOTORING NEWS - Volvo Cars' entire new product portfolio could be inspected and admired on South African soil as a family unit for the very first time.

This was at the V&A Waterfront during the recent rest stop of the Volvo Ocean Race.

Visitors had the choice of three kinds of superstar to admire: the cars, the sleek and menacing boats or the incredibly muscled crew members.

Although the latter two are less known outside yacht racing circles, we were assured that they are all real celebrities.

The boats have sheer ability and the competing crews more awards, Americas Cup wins and Olympic gold medals than one could shake a stick at.

Ocean racing had its heyday in South Africa during the era of solo skipper around the world Bertie Reed, as well as the numerous Cape To Rio races.

In this instance, it was incredibly interesting to be brought up to date in what is now an extremely technological and competitive sport.

The participants departed on the next leg to Melbourne, Australia last Sunday, 10 December on a journey expected to last about 16 days.

During this time we were informed that the crews can expect little rest, Spartan meals and never being dry the entire time. The view from the product desk over the harbour.

BACK TO THE CARS
The new XC40 and the all new XC60 introduced are two models due to be launched locally in 2018.

The new Volvo XC40 was making its first public debut outside Europe. It represents the manufacturer's first entry into the popular compact SUV segment.

The Swedes threw away the rule book with a youthful style inside and out. The interior in bright orange is almost a throw-back to 1970s furnishings, but one got diverted by other segment firsts like semi-autonomous driving and Volvo's industry-leading safety systems. 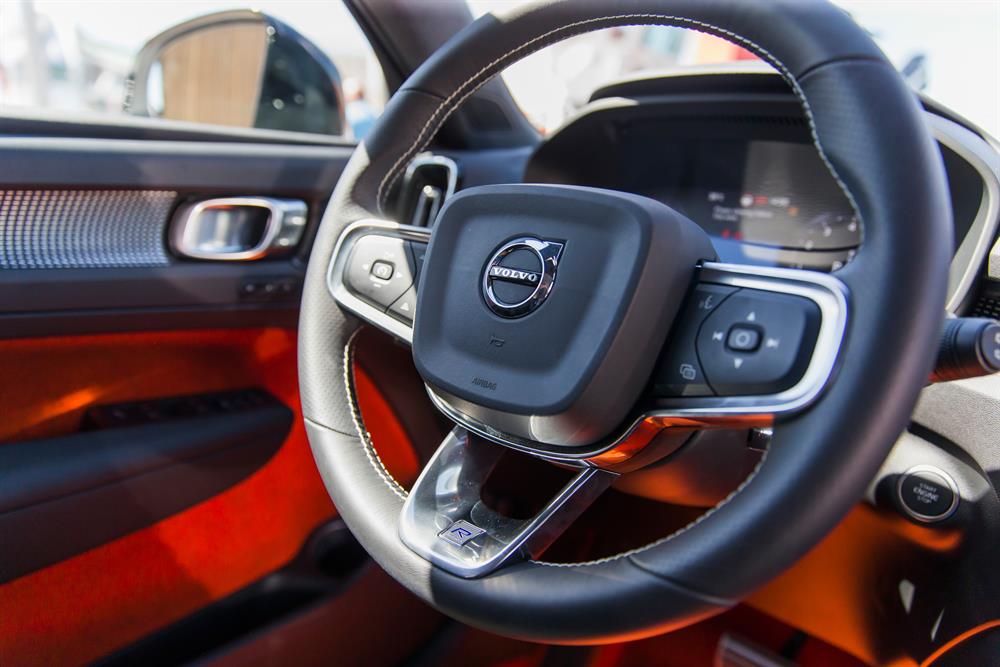 The interior of the XC40 - bright in colour, but also in its new technology.

Making its local debut in April 2018, the new XC40 is the first Volvo to be built on the new Compact Modular Architecture (CMA) platform.

Competing in the medium SUV segment, the all-new Volvo XC60 was also on display, exhibiting style and practical utility.

The original XC60 set a new benchmark for safety and over one million units were sold globally. It is being replaced by a completely new and even safer model.

"2018 is going to be a big year for us," comments Volvo Car South Africa Managing Director, Greg Maruszewski.

"With two new SUVs on the way that compete in fiercely popular segments, we are not only going to replace one of our most popular models with the all-new XC60, but also invite a new audience to join the Volvo family with the new, compact XC40."

A NEW ERA STARTED
The first of the new era Volvo cars to be launched in South Africa was also on display, in the same spot where it was first unveiled on local soil during the 2014 Volvo Ocean Race stopover.

The Volvo XC90 has been on sale locally since 2015 and the range has expanded since then with the addition of T8 twin engine plug-in hybrid variants and the exclusive XC90 Excellence in 2016.

The XC90 was crowned the 2016 South Africa Car of the Year and set the tone for a new Volvo Cars brand globally with over 120 global awards to date.

The model on show in Cape Town, the XC90 Excellence, exhibits the ultimate in opulent, first-class SUV motoring, with its four-seat interior and superior luxury elements.

The Volvo S90, a contender for the 2018 South African Car of the Year, was also on display in Cape Town.

The svelte Swedish sedan made its local debut early in 2017 and brought Scandinavian style to the large premium sedan segment.

The R-Design version on display showed a different face of the elegantly poised S90 range.

It is more aggressive in appearance with sportier driving dynamics.

This special edition model is not destined for local retail, but the rest of the V90 Cross Country range has been available in South Africa since May 2017.

Competing in a class of one in South Africa, the V90 Cross Country continues Volvo's legendary crossover estate heritage in a stunning overall package.

"Our 2016 SA Car of the Year win with the WesBank and SA Guild of Motoring Journalists (SAGMJ) competition with the XC90 was proof that the new Volvo recipe works, and we have high hopes for the 2018 award with the S90 as well," concluded Maruszewski.