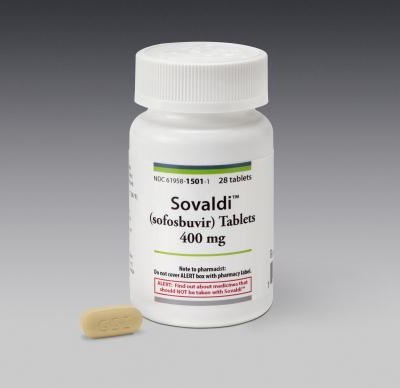 The exorbitantly expensive drug, Sovaldi.
INTERNATIONAL NEWS - France said Thursday it has joined forces with 13 other European countries to negotiate a lower price for a promising new hepatitis C drug that has drawn controversy for its astronomical cost.

Sovaldi, made by US pharmaceutical firm Gilead Sciences, has shown huge potential at helping cure the liver disease but its price -- more than 50,000 euros ($68,000) for a 12-week course of treatment -- has health authorities concerned.

"If we accept such a high price, firstly we won't be able to treat everyone and we will also be creating a risk for our social security system, which means for other patients," French Health Minister Marisol Touraine said Thursday.

She told BFMTV that Sovaldi would cost the country's already heavily-indebted welfare system billions of euros.

"So I launched an initiative... to mobilise all European countries and make sure we join forces to weigh on price negotiations with this US laboratory.
"For the first time, 14 European countries have made a commitment together. We will therefore negotiate country by country as that's how it's done, but we will exchange information and discuss things between European countries."

Hepatitis C is caused by a virus that can be transmitted through sharing needles, receiving contaminated blood transfusions or having sex with an infected person.
Some 350,000 people die of hepatitis C-related liver diseases annually, and as many as four million people are newly infected each year, according to the World Health Organization.

Most of the 185 million people infected worldwide do not know they have the disease, with diagnoses often only discovered after a person develops cirrhosis, end-stage liver disease or liver cancer.

There is no vaccine for the disease, but Sovaldi, recently approved in the United States and the European Union, has been shown to cure more than 90 percent of those treated, up from 50 to 60 percent for the previous generation of drugs.

Results published in January of a clinical trial that involved 211 people showed that a daily combination of Sovaldi and another drug still in the experimental phase cured 98 percent of participants.

Dozens of medical associations in France have issued a joint warning over the "exorbitant" cost of new generation hepatitis C drugs, including Sovaldi.

Medecins du Monde says the cost of treating just over half of France's 230,000 sufferers would amount to the annual budget of Paris' public hospital network.

Egypt, which has the world's highest infection rate of hepatitis C -- at more than 10 percent of the population, because syringes are routinely re-used -- has negotiated a 12-week treatment price of just $900 from Gilead.