Dangerous waste to be removed 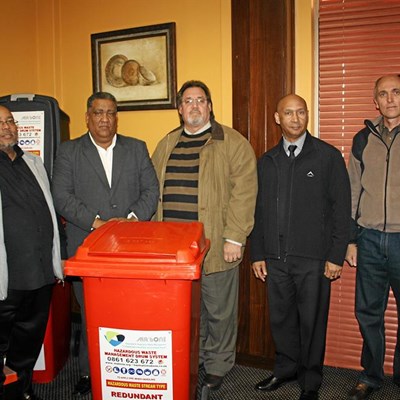 On Monday morning, the Electronic Waste Project and the Redundant Hazardous Chemicals Schools programme were officially launched. According to Morton Hubbe, chief of the Eden District Municipality's Waste Management, they received several requests from schools within the Eden district on how to get rid of electronic waste and chemicals. "We want to advise them on how to do it in a safe manner and see that when they get rid of it, it doesn't become a problem again."

Francois Kriel from Ma'bone, explained the danger of this type of waste and said they want to remove it without life lost. According to Hubbe, 46 high schools in the Eden region already gave notice that they want to get rid of this dangerous waste. Hubbe said their are more than 200 schools in the region.

Hubbe said the project covers the entire hazardous waste stream for 155 different redundant chemicals to be identified at schools which will include the handling, packing, transportation, treatment and disposal of all redundant chemicals for these schools under the supervision of the Ma'bone Hazmat Haschem team. "The compilation of standard operating procedures will be implemented at schools to properly manage hazardous substances and waste in the future.

The public can phone the local municipalities for more information on where to dump electronic waste.