A good start to spring

GEORGE NEWS - It certainly was a good start to spring when three teenagers were saved from a near drowning at Herold's Bay on Sunday 1 September.

According to Mike Vonk, NSRI Wilderness deputy station commander, the three boys were swimming when they got into difficulty in the surf.

A young local, Dewald Gerber (14), who was swimming with a friend, noticed a teenager from Kuruman in the Northern Cape who had been caught in a rip current and was being swept out to sea.

"Gerber had gone to the assist the boy from Kuruman but he then noticed that his own friend, a male teenage learner, was also in difficulty. He was on his way to help his friend when a person appeared with a pink rescue buoy to assist them to safety," said Vonk.

Cliff Coombe, a former Strand and Fish Hoek lifeguard who now lives in George, was walking on the beach with his wife Tracy, when they noticed the three teenagers in difficulty.

"My wife and I were walking along the promenade when we saw three guys being pulled in by the rip. I grabbed the pink buoy and swam to the first two children (Gerber and his friend). By that time Sydney, a local body boarder, came out with his body board and got the boy from Kuruman. They swam to us and we all went to shore," Coombe said. 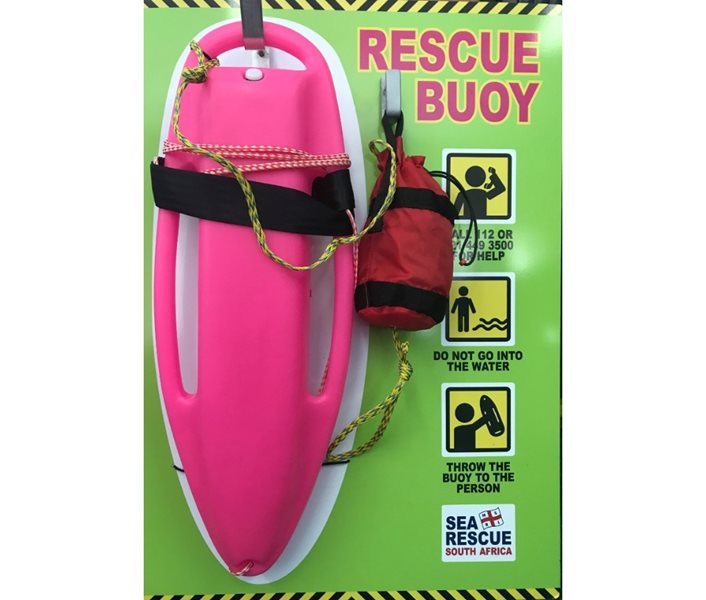 The Pink Rescue Buoy Project
Sea Rescue's pink rescue buoy project was started in November 2017. There are more than 450 pink rescue buoys at drowning hot spots and to date they have been used to successfully help 45 people who were in danger of drowning.

The project won the 2018 International Maritime Rescue Federation award for innovation and technology, which was presented at a prestigious gala dinner in Norway last year.

A pink rescue buoy and the sign that it hangs on costs R1 500 and needs municipal permission to be put up at public waters. If you would like to sponsor this project, please e-mail aty@searescue.org.za for more details.

Read a related article: 3 saved from near drowning at Herolds Bay.