US polls expected to deal rebute to Obama 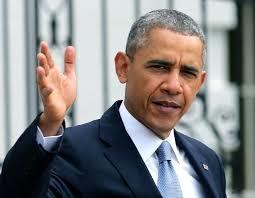 The party of an incumbent US president historically fares badly in elections in the middle of his second term, and this time is expected to be no different for Obama.

The first polling stations opened in the states of Indiana, Kentucky, Maine, New Hampshire, New Jersey, New York and Virginia, with the rest of the country to follow.

Although the economy has been improving gradually since the recession of 2008, the national mood is far from buoyant.

Much attention has focused on recent flashpoint crises like Ebola and advances by the Islamic State jihadists in Syria and Iraq.

Democrats currently hold a 55-45 seat advantage in the US Senate, while Republicans control the House of Representatives.

If Republicans take a net six seats in the Senate, Obama will spend his last two years in office facing a hostile Congress as he contends with Ebola, Islamic extremists and improving the economy.

The race for the Senate has been very expensive -- an estimated $423 million in TV spots about Senate races, according to the Washington Post.

Recent polls show Republicans pulling ahead in the battle for power in Washington despite races in Alaska, North Carolina and other states remaining very close, and they expressed confidence in the home stretch.

"We intend to be a responsible governing Republican majority," the party's top Senator Mitch McConnell told ABC News as he barnstormed his state of Kentucky.

The veteran politician is locked in the tightest race of his career with resilient Democratic challenger Alison Lundergan Grimes, but two weekend polls showed McConnell extending his lead.

"The wind is at our backs," Senator Rand Paul, a potential 2016 Republican presidential candidate, told CNN on Sunday. "I think people are ready for new leadership."

Republicans have hammered home their message that a vote for Democrats is a vote for a tarnished Obama and his policies.

"This is a referendum on the president," Paul told NBC.

In the House of Representatives, where all 435 seats are in play, experts predict the Republicans will gain more seats. A third of the 100-seat Senate is also up for grabs.

Three top forecasters now give Republicans between a 70 percent and 77 percent chance of winning the Senate as well.

But however successful the Republicans are, a complete picture may not emerge on Tuesday.

There are strong prospects for runoffs in Louisiana and Georgia, where rules require a second round if winners do not earn more than 50 percent of the vote.

Add to that a probable days-long ballot count in remote Alaska, where there is an unpredictable and tight race, which would also delay matters.

Louisiana's runoff is December 6, but a Georgia runoff would be on January 6, three days after the start of the new Congress.

Polls -- and history -- show that Republicans would have the advantage in overtime in both states, although there would be intense ground games and ad wars, especially if the fate of the Senate were still up in the air.

While both parties have rolled out their surrogates to rally voters, Obama -- all too aware of his status as a lightning rod for Republican criticism -- has largely steered clear of the campaign trail.

And his Tuesday schedule shows a president seeking to appear above the fray, scheduling a series of meetings on defense and Ebola -- but no last-minute stumping for Democrats.

Vice President Joe Biden said he does not "agree with oddsmakers" and feels Democrats could hold the Senate, a sentiment the White House said Obama shared.