Tillerson says talks with N.Korea may be close, notes ‘restraint’

The United States said Tuesday that talks with North Korea may be possible “in the near future” after Pyongyang reacted to tough new UN sanctions with a level of restraint. 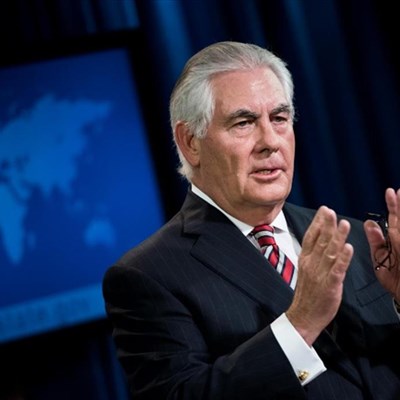 US Secretary of State Rex Tillerson said North Korea still needed to do more to allay tensions, but that he wanted to acknowledge what they had done so far. Photo: © AFP | Brendan Smialowski

INTERNATIONAL NEWS - But, in keeping with a “dual track” strategy of reaching out to the North diplomatically while increasing economic pressure, Washington also imposed new sanctions on Chinese and Russian firms suspected of doing business with Pyongyang.

Briefing reporters, US Secretary of State Rex Tillerson made a point of acknowledging that Kim Jong-Un’s regime has not carried out any new nuclear or ballistic missile tests since the UN Security Council imposed a new round of tougher sanctions last month.

“I am pleased to see that the regime in Pyongyang has certainly demonstrated some level of restraint that we’ve not seen in the past,” Tillerson said.

“We need to see more on their part, but I want to acknowledge the steps they’ve taken thus far. I think it’s important to take note of that.”

US officials told AFP that Tillerson was not thanking Pyongyang, nor making any concession on Washington’s determination to halt Kim’s missile program and negotiate the denuclearization of the Korean peninsula.

But they said he did want to note what the US administration sees as a lowering in immediate tensions, in the hope that the isolated authoritarian regime will see an opening that could lead to dialogue.

‘Ready to restrain’?Tensions between North Korea and the United States and its allies soared last month after Pyongyang tested two long-range missiles that appeared to bring US cities within its range.

US President Donald Trump vowed to respond with “fire and fury,” raising fears of a devastating regional conflict, and the UN Security Council scrambled to impose new punitive measures on the North.

Kim’s regime later postponed a threat to fire missiles towards the US Pacific island territory of Guam, and Washington said it would be open to dialogue if Pyongyang were to take steps to calm tensions.

On Tuesday, Tillerson suggested that progress can now be made.

“I think it is worth noting that we have had no missile launches or provocative acts on the part of North Korea since the unanimous adoption of the UN Security Council resolution,” he said.

“And I want to take note of that. I want to acknowledge it.”

Just before Tillerson alluded to the existence of a carrot to tempt North Korea, however, the US Treasury brandished its stick.

The agency slapped sanctions on 16 Chinese and Russian individuals and companies, accusing them of supporting North Korea’s nuclear program and attempting to evade US sanctions.

The sanctions are part of a broader US effort to disrupt the funding of North Korea’s weapons programs through its export of natural resources such as coal and minerals and foreign-based financial transactions undertaken for North Korean interests.

“It is unacceptable for individuals and companies in China, Russia, and elsewhere to enable North Korea to generate income used to develop weapons of mass destruction and destabilize the region,” Treasury Secretary Steven Mnuchin said.

Trump has urged Beijing, North Korea’s only major ally, to bring greater pressure to bear in reining in its neighbor’s nuclear efforts, suggesting that the United States may offer concessions on trade in return.

Targets of sanctionsThe sanctions block those targeted from accessing much of the global financial system and freeze any assets they might hold in areas under US jurisdiction.

Among those hit was Russian national Ruben Kirakosyan and his Moscow-based company Gefest-M LLC, which the Treasury accuses of procuring metals for a company involved in North Korea’s nuclear weapons program known as Korean Tangun Trading Corp.