A boy places flowers on 28 October outside of Pittsburgh's Tree of Life Synagogue where 11 people were killed by a gunman in the deadliest anti-Semitic attack in US history.

INTERNATIONAL NEWS - The shooter in the attack on a Pittsburgh synagogue spoke of "genocide and his desire to kill Jewish people," authorities said Sunday, as they identified the dead and worked to console the living.

Federal officials said 46-year-old Robert Bowers, who was arrested at the scene after a firefight with police, faces 29 separate federal charges, several of them carrying the death penalty. He was scheduled to appear before a federal magistrate on Monday.

Civil rights groups called the bloody assault on the 150-year-old Tree of Life synagogue, in a heavily Jewish neighborhood, the deadliest anti-Semitic attack in US history.

Saturday's attack left many in the country's Jewish community reeling, feeling sick and vulnerable. And Jewish leaders expressed concern about what they said was a spike in anti-Semitic acts in the past two years.

In Squirrel Hill, the close-knit neighborhood and heart of Pittsburgh's Jewish community where the attack occurred, a hush descended. "Heartbroken," said Aylia Paulding, 37, her voice breaking as she summed up the grief-stricken mood.

Words of solidarity and consolation poured in from across the globe, with Israeli Prime Minister Benjamin Netanyahu declaring himself "heartbroken and appalled." 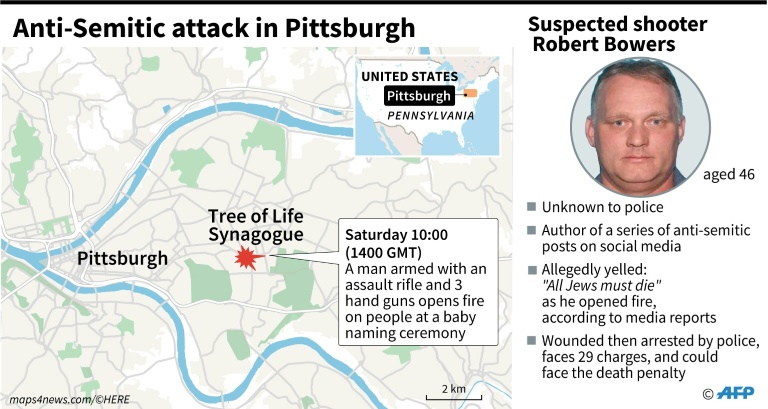 Putting names to the victims

The victims - shot down in what authorities said was a 20-minute rampage after the gunman burst into the building during a baby-naming ceremony - ranged in age from 54 to 97, said Karl Williams, the county medical examiner. They included two brothers and one married couple.

Four police officers or SWAT team members were injured. Bowers himself has been hospitalized in fair condition with multiple gunshot wounds.

President Donald Trump, speaking at a campaign rally in Illinois late Saturday, solemnly denounced the attack, saying, "The scourge of anti-Semitism cannot be ignored, cannot be tolerated and cannot be allowed to continue."

Earlier, however, he said one answer to such apparent hate crimes was to provide guards at places of worship, not to tighten the country's loose gun laws. 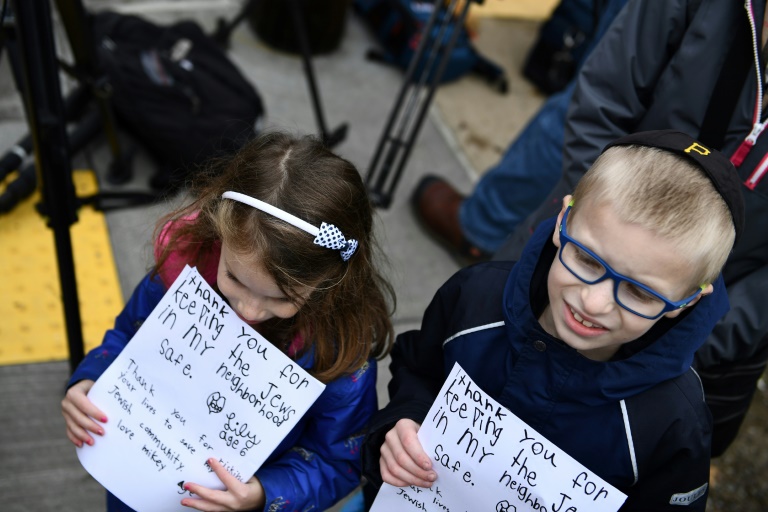 Children hold thank-you notes to authorities outside of the Tree of Life Synagogue after a shooting left 11 people dead in the Squirrel Hill neighborhood of Pittsburgh.But the mayor of Pittsburgh had a different approach, calling on Sunday for guns to be taken away from potential hate criminals.

"I think the approach that we need to be looking at is how we take the guns, which is the common denominator of every mass shooting in America, out of the hands of those that are looking to express hatred through murder," Mayor Bill Peduto, a Democrat, told the news conference.

'We will spare no effort'

Scott Brady, US attorney for Pennsylvania's Western District, said the suspect was heavily armed, carrying an AR-15 assault rifle and three .357-caliber Glock handguns, all of which he used. Brady said shells were found strewn through the grisly crime scene, but he could not estimate the number of shots fired. 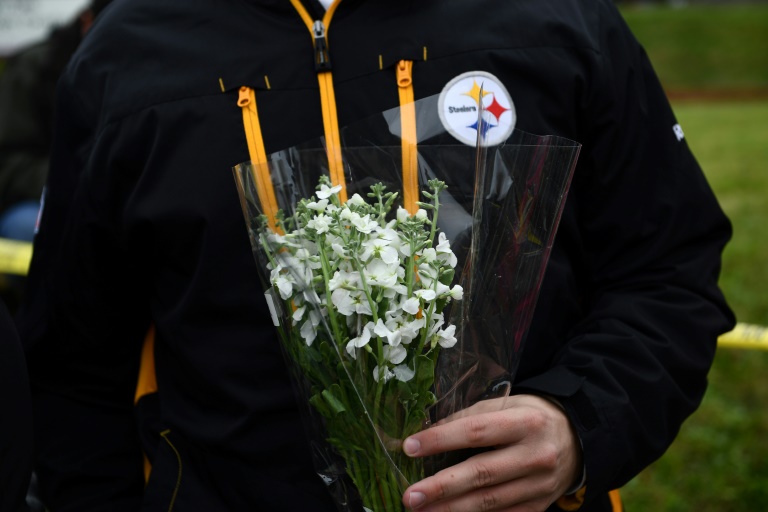 A man arrives with flowers on 28 October outside of the Tree of Life Synagogue as the Jewish community grieves the murder of 11 worshippers in an anti-Semitic attack.

"We will spare no effort or resource in ensuring that the defendant is held fully accountable for his unspeakable and hateful crimes," Brady told reporters.

Among the charges filed are 11 counts of murdering victims who are exercising their religious beliefs, 11 of using a firearm to commit murder and seven related to his attacks on the officers who, Police Chief Scott Schubert said, "ran into gunfire to help others."

Authorities said they believe the shooter acted alone, but that the "large, complex crime scene" could take a week to process.

Dr. Karl Williams, chief medical examiner of Allegheny County, said he had met late Saturday with all the families during the difficult process of identifying the dead.

"There's no words to express the sympathy that they need," he said.

He said four rabbis were working with his team, establishing "a continued presence at my office" as they help families deal with the shock and horror of the attack.

Williams said that as autopsies are being performed, "We are doing everything in our power to complete the process in a way that honors both civil and religious law."

Heightened tensions
Saturday's attack came at a time of heightened tensions nationwide - a day after a Trump supporter from Florida was arrested for mailing explosive devices to Democrats and liberals, setting the country on edge ahead of close-fought elections on November 6. 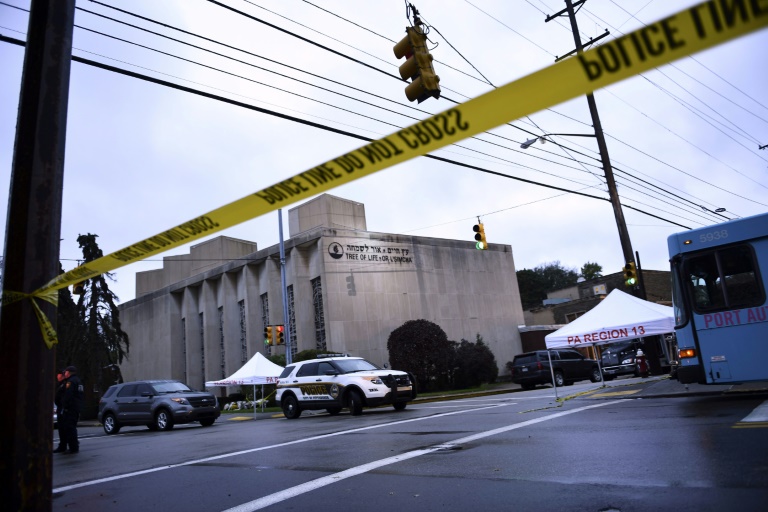 Police say it will take at least a week to process the crime scene at the Tree of Life Synagogue in Pittsburgh, scene of a mass shooting that left 11 worshippers dead.

Bowers, who reportedly has worked as a trucker, is believed to be the author of a recent rash of violently anti-Semitic posts on social media, notably on Gab.com, a site frequented by white nationalists.

Atop a page that Gab said belonged to Bowers were the words "jews are the children of satan," and in a post hours before the attack he described Jews as "hostile invaders" and said, "I can't sit by and watch my people get slaughtered." 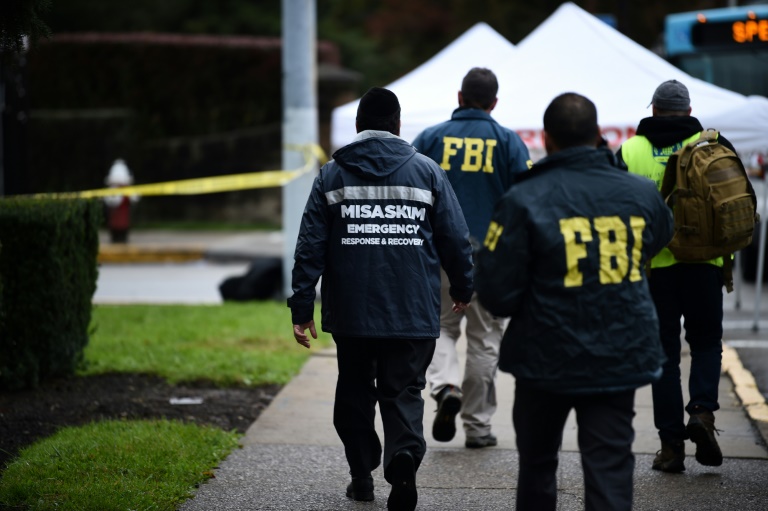 Members of the FBI and others survey the area outside the Tree of Life Synagogue in Pittsburgh.

Jonathan Greenblatt, director of the Anti-Defamation League, said on Sunday that members of his anti-bigotry group were "shocked" by the Pittsburgh shooting, but "unfortunately, in some ways, we weren't surprised."

He told ABC that "in 2016 we saw a 34 percent increase in acts of harassment, vandalism and violence against the Jewish community," and last year brought "a 57 percent increase, the single largest surge that we've ever seen."

The Pittsburgh police said they have closed off the area around the Squirrel Hill neighborhood where the shooting took place and have added patrols in "sensitive locations."

Authorities and Jewish spokespeople in New York and Washington said security around synagogues had been bolstered. 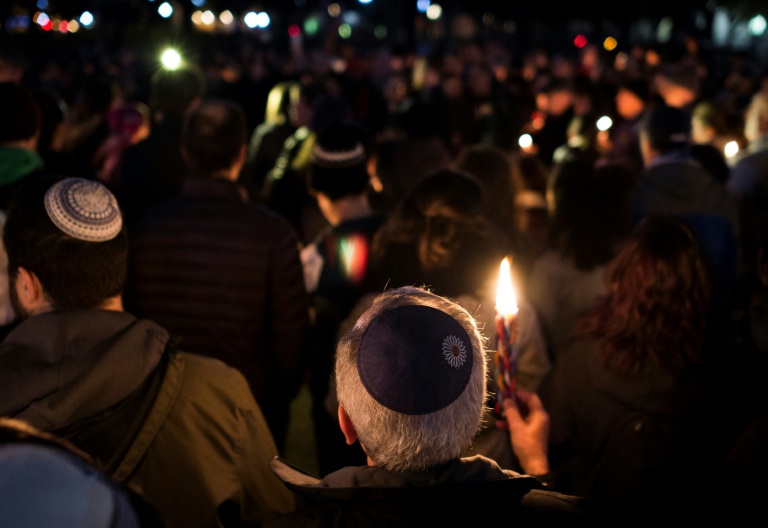 Members and supporters of the Jewish community come together for a candlelight vigil in front of the White House 27 October after a mass shooting at a Pittsburgh synagogue that left 11 dead.