Polish President Andrzej Duda speaks to a crowd on September 1 during an event to commemorate the outbreak of World War II in Gdansk.

INTERNATIONAL NEWS - Poland's President Andrzej Duda has tested positive for coronavirus, an aide said Saturday, as the EU country faces a record rise in cases and mass protests despite a ban on public gatherings intended to stem infections.

Duda is the latest in a string of leaders to have been diagnosed with the virus, including US President Donald Trump, British Prime Minister Boris Johnson and Brazil's President Jair Bolsonaro.

All have recovered and aside from the diagnosis, the 48-year-old Duda is believed to be in good general health.

"Ladies and Gentlemen, as recommended President @AndrzejDuda was tested yesterday for the presence of coronavirus. The result turned out to be positive. The president is fine," Blazej Spychalski, secretary of state in the president's office, said on Twitter.

While it was unclear when the Duda was infected, he attended an investment forum in Tallinn on Monday where he met Estonian President Kersti Kaljulaid and Bulgarian President Rumen Radev.

Kaljulaid said on her Facebook page she tested negative for the virus after returning home from France on Friday. Radev had meanwhile cut short his visit to Tallinn on Tuesday go into quarantine in Sofia.

Backed by Poland's governing nationalist Law and Justice (PiS) party, Duda won a second consecutive term in office in July on the back of a campaign that included promises of continued generous social spending and attacks on Poland's LGBT community.

His diagnosis comes after it was announced on Monday that powerful PiS party leader Jaroslaw Kaczynski, widely seen as calling the shots in Poland, had gone into quarantine after being in contact with a person diagnosed as positive for the coronavirus.

No further comment has been made on the condition of the 71-year-old Kaczynski by the PiS party or the government, in which he serves as deputy prime minister.

Mass protests
Poland went into a "red zone" lockdown on Saturday, including the partial closure of primary schools and restaurants along with a raft of restrictions tailored to stem infection while allowing more economic activity than during this spring's more stringent anti-virus regime.

But tens of thousands of Poles have taken to the streets in protest since Thursday when the EU country's top court rendered a ruling that imposes a near-total ban on abortion in Poland. 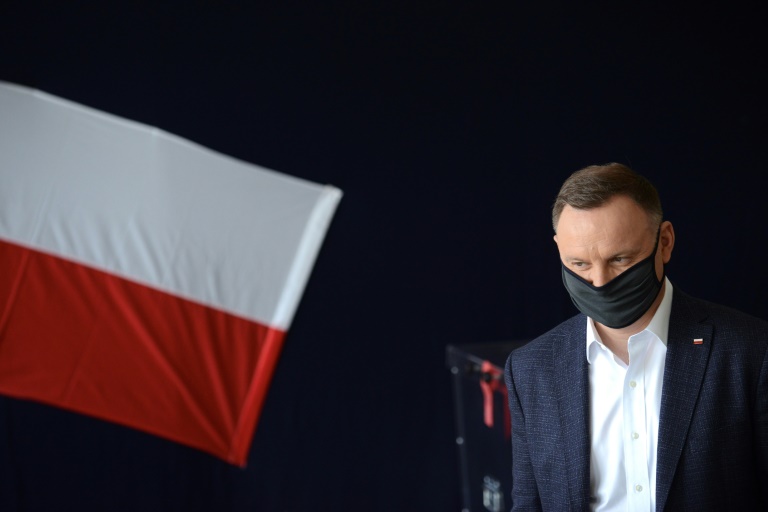 Polish President Andrzej Duda arrives at a polling station in Krakow on June 28 to vote during Poland's Presidental election.

More protests are planned Saturday, when a five-person limit on gatherings comes into force under government anti-coronavirus guidelines.

The country of 38 million people saw a near-record 13,628 new coronavirus cases over 24-hours as of Saturday

Poles have been asked to work remotely if they can and primary schools are partially closed with only grades one to three attending classes.

Secondary school and university students switched distance learning a week ago, while all seniors over the age of 70 have been asked to stay home as of Saturday.

Restaurants, cafes and pubs are only be able to serve take-away meals. Fitness clubs and pools are also closed.

Weddings are banned and there are strict limits on the numbers of people allowed in shops, on public transport and at religious services.

Poland's national stadium is being transformed into a field hospital for Warsaw and the government is building temporary medical facilities elsewhere, as the surge in coronavirus cases strains healthcare facilities to breaking point.