"The resolution declaring the vacancy of the presidency of the republic has been approved," declared Congress leader Manuel Marino, who under the constitution will take over the presidential functions until the end of the current term in July 2021.

Peruvian President Martin Vizcarra pleads his case in Congress ahead of his impeachment, in Lima, November 2020.

INTERNATIONAL NEWS - Peru's Congress voted Monday to impeach and oust President Martin Vizcarra over allegations he took kickbacks from developers while serving as a regional governor in 2014.

After an impeachment trial that lasted nearly eight hours, the motion to remove the popular president was approved by 105 votes to 19, with four abstentions - far exceeding the 87 votes needed to impeach.

"The resolution declaring the vacancy of the presidency of the republic has been approved," declared Congress leader Manuel Marino, who under the constitution will take over the presidential functions until the end of the current term in July 2021.

Vizcarra's tumultuous presidency ended in a similar fashion to that of the man he replaced, Pedro Pablo Kuczynski, a former Wall Street banker who was forced to resign under threat of imminent impeachment over corruption allegations in 2018.

"Peru comes out weaker institutionally. Merino will be a weak president, that is the scenario in the context of general elections against the backdrop of a pandemic," political analyst Augusto Alvarez Rodrich told AFP.

Peru will hold general and presidential elections in April 2021.

Merino, 59, will be sworn in at a special session of Congress on Tuesday, becoming Peru's third president since 2016, reflecting the institutional fragility which has characterized the South American country since independence from Spain in 1821.

Constitutionally, succession falls to Merino because Vizcarra's vice-president, Mercedes Araoz, resigned a year ago in the wake of a separate political crisis.

Vehement defense
Speaking in his defense at the start of the impeachment trial earlier Monday, the 57-year-old president rounded on his critics, vehemently denying that he had ever accepted bribes.

"I emphatically and categorically reject these accusations," Vizcarra told lawmakers ahead of the vote over charges that he accepted some $620,000 in bribes in 2014 when he was a regional governor. 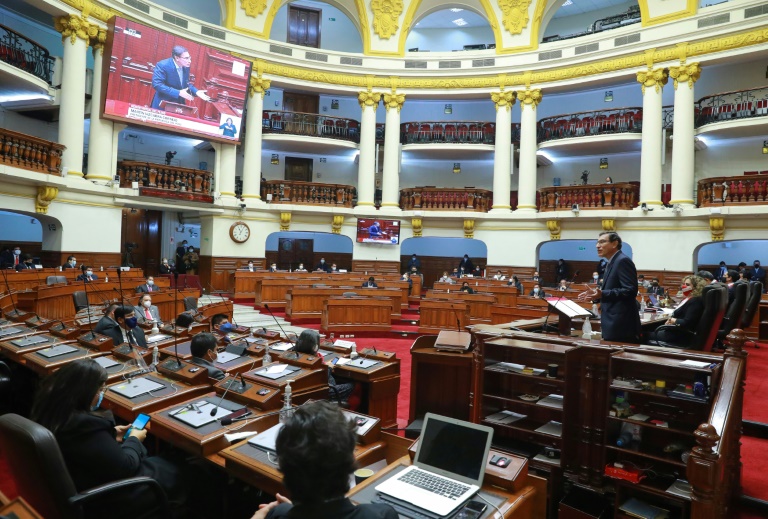 Peru's President Martin Vizcarra (R) defends himself against allegations of corruption in a speech to Congress ahead of his impeachment, November 2020.

Several businessmen claim Vizcarra received kickbacks in exchange for public works contracts while he was governor of the southern department of Moquegua.

Vizcarra told lawmakers on Monday that the two contracts in question were assigned by a UN agency and not by his administration in Moquegua.

Prosecutors have been investigating the claims since 2018, but they only gained political traction because of press reports, a fact highlighted by Vizcarra in his defense.

Neither the public prosecutor's office nor the court system had levelled charges against him, he said.

He argued that no fewer that 68 of the members of the 130-seat Congress seeking his impeachment themselves faced ongoing legal processes without being removed from office.

Last month, the Attorney General's office announced it would investigate the allegations against Vizcarra when his term - and the immunity afforded by his office - ended in April, but Vizcarra's opponents in Congress decided not to wait.

The impeachment removes a president who has won public support at a time when Peru is seeking to emerge from an acute economic crisis due in part to the coronavirus pandemic, which has hit the country hard.

The South American country has the world's highest per capita death-rate from the disease, which has nearly 35,000 deaths and more than 920,000 cases.

Public backing
Vizcarra has won popular backing over pledges to root out entrenched corruption in Peruvian politics since assuming power in 2018, though he has been at loggerheads with opponents in Congress, where he lacked a party of his own, as well as a solid majority.

Support for the president has been strong in opinion polls, and on social networks and pot-banging protesters took to the street around the Congress building in the immediate aftermath of Monday night's vote. 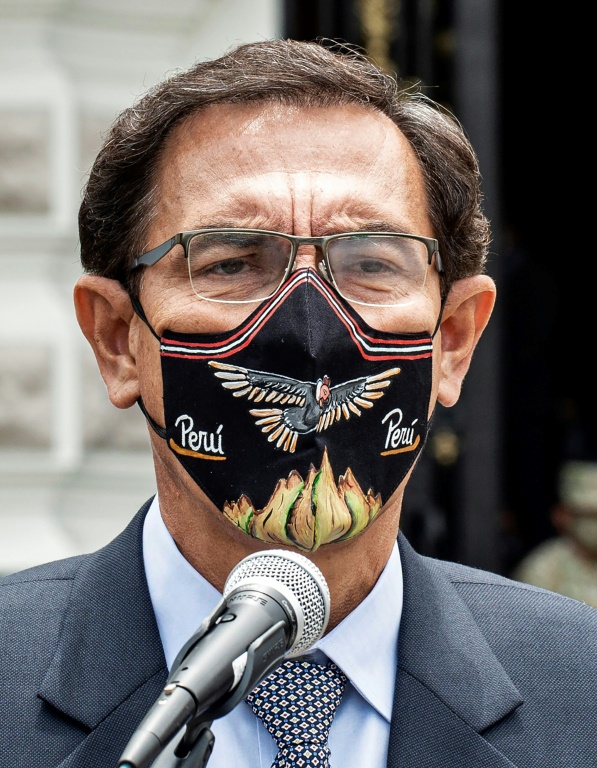 Vizcarra speaks outside the Congress after a speech defending himself against allegations that he received kickbacks ahead of his impeachment, in November 2020.

Police clashed with pro-Vizcarra demonstrators a few blocks from the Congress building. Some waved signs accuseing the Congress of a "coup".

Vizcarra received similar support when he survived a previous impeachment vote in September.

Eight out of 10 Peruvians wanted him to continue until the end of his mandate in July 2021, according to an Ipsos poll.

Business leaders called on Congress to show unity in order to face the economic and health crisis, while influential Catholic leader Cardinal Pedro Barreto said removing the president now would be "catastrophic" for the country

On that occasion, the vote centered on allegations that he directed aides to lie to investigators in a separate, relatively minor, case.

His opponents in Congress failed to garner enough votes to convict him of "moral incapacity."

Vizcarra succeeded Kuczynski in March 2018 after he resigned ahead of an impeachment vote brought after he became embroiled in the giant Odebrecht scandal.