The first meeting between Putin and Trump will take place in the Russian city of Vladivostok.

INTERNATIONAL NEWS - Kim Jong Un and Vladimir Putin will meet in Russia's Far East on Thursday, the Kremlin said, as the North Korean leader looks to rebuild ties with an old ally amid a standoff with the United States.

Kremlin foreign policy aide Yuri Ushakov said the meeting - the first between the two men - would take place in the Pacific coast city of Vladivostok, before Putin heads to Beijing for another summit.

"The focus will be on a political and diplomatic solution to the nuclear problem on the Korean Peninsula," Ushakov told a briefing on Tuesday.

"Russia intends to help consolidate positive trends in every way," he said.

Russian news agency Interfax reported that he was expected to cross into Russia at the border town of Khasan, and the Ria Novosti agency quoted Russian rail service sources saying the train was expected to arrive at Vladivostok station at 6:00 pm local time (0800 GMT) on Wednesday.

Expectations for a summit had been building since the Kremlin announced last week the two men would meet by the end of April.

Russian and North Korean flags were already flying on lamp posts Tuesday on Vladivostok's Russky island, where the summit is expected to take place at a university campus.

Ushakov said the talks would begin one-on-one and then move into an "expanded format", without providing further details.

He said no joint statement or signing of agreements was planned. 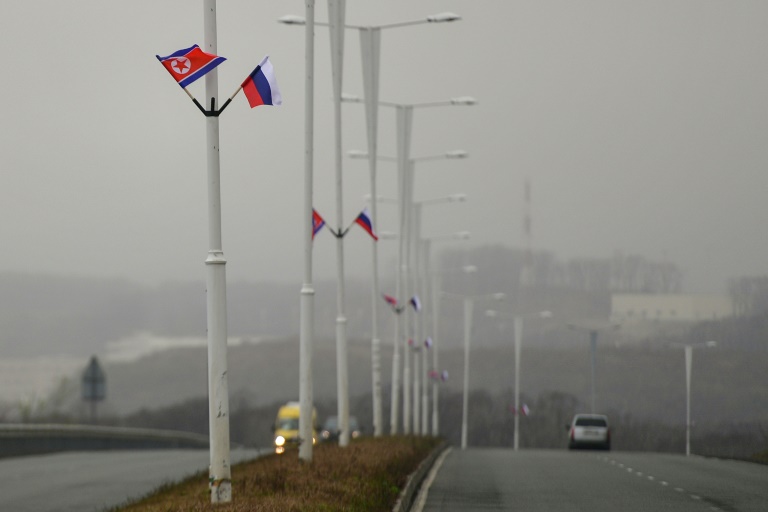 A train carrying Kim is expected to arrive in Vladivostok on Wednesday, according to Russian media.

The talks follow repeated invitations from Putin since Kim last year embarked on a series of diplomatic overtures.

Since March 2018 the formerly reclusive North Korean leader has held four meetings with Chinese President Xi Jinping, three with the South's Moon Jae-in, two with US President Donald Trump and one with Vietnam's president.

Analysts say he is now looking for wider international support in his standoff with Washington.

At Kim's last summit with Trump in Hanoi in February, Pyongyang demanded immediate relief from sanctions imposed over its nuclear weapons and ballistic missile programmes.

But the talks broke down over what North Korea was prepared to give up in return.

Last week Pyongyang launched a blistering attack on US Secretary of State Mike Pompeo, demanding he be removed from the negotiations just hours after announcing it had carried out a new weapons test.

Moscow has called for the sanctions to be eased, while the US has accused it of trying to help Pyongyang evade some of the measures - accusations Russia denies. 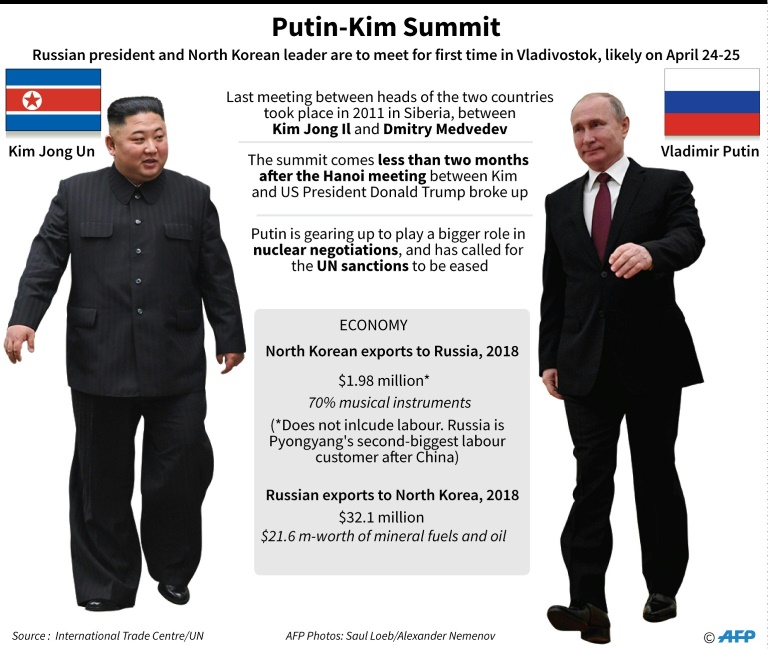 Ties between Pyongyang and Moscow, once its most important ally, go back decades .

The Vladivostok meeting appears to have been discussed with Washington.

Ushakov met last week in Moscow with Fiona Hill, a foreign policy adviser to Trump, for talks on North Korea. The US special envoy for North Korea Stephen Biegun was also in Moscow at the time for meetings with Russian officials.

North Korea's defence minister No Kwang Chol was in Moscow Tuesday for an international security conference.

The summit will be the first between the two neighbours since Kim's father Kim Jong Il met Dmitry Medvedev in Russia eight years ago. Putin previously met Kim Jong Il in Vladivostok in 2002.

Ties between Pyongyang and Moscow, once its most important ally, go back decades.

The Soviet Union installed Kim's grandfather Kim Il Sung as North Korea's leader and was a crucial backer and main aid provider to Pyongyang during the Cold War.

The USSR started to reduce funding to the North as it began to seek reconciliation with Seoul in the 1980s, and Pyongyang was hit hard by the demise of the Soviet Union.

China has since stepped in to become the isolated North's most important ally, its largest trading partner and crucial fuel supplier.

Analysts say that by reaching out to Russia Kim could be looking to balance Beijing's influence, while Putin is keen to project Russian influence in another global flashpoint.

"It's part of the North's Juche - self-reliance - ideology not to rely on a single ally," said Jeong Young-tae, an analyst at the Institute of North Korean Studies in Seoul.

"Pyongyang has a group of experts on diplomacy who have been in their post for decades. They'll know how to play the game if it ever becomes necessary for Pyongyang to play off its allies against each other."