Cielo Drive, a leafy and winding road above exclusive Beverly Hills, is where Sharon Tate was stabbed to death in 1969.

INTERNATIONAL NEWS - As a tour guide specializing in notorious Hollywood deaths, Scott Michaels is well aware of America's morbid fascination with the dark side of Tinseltown.

But on the 50th anniversary of the murders of actress Sharon Tate and four others at the hands of Charles Manson's apocalyptic cult, he has never seen anything like it.

"It's unprecedented really. I've never seen the attention," he told AFP at his museum in Los Angeles. "I'm running extra tours, two or three extra tours a week. The attention is crazy."

Michaels drives his customers up to Cielo Drive, the leafy and winding road above exclusive Beverly Hills where director Roman Polanski's wife Tate - eight-and-a-half months pregnant - was stabbed to death in the early hours of 9 August 1969.

One of those customers last year was director Quentin Tarantino, undertaking research for his new hit movie "Once Upon a Time in Hollywood" which takes the killings as its backdrop.

The deaths terrorized Hollywood and made headlines around the world.

Manson, portrayed at his trial as a drug-crazed loner with mesmerizing powers of persuasion, ordered devotees to carry out killings in wealthy white neighborhoods in an effort to trigger a race war.

The film features Margot Robbie as an innocent and carefree Tate, and has intensified interest in a tragedy often described as a seminal moment in US history - the end of the 1960s era of peace and love.

"Sharon was beautiful ... She's become this sort of true crime symbol of absolute good, whereas Manson is the opposite," says Michaels, who is credited as a technical consultant on the film. 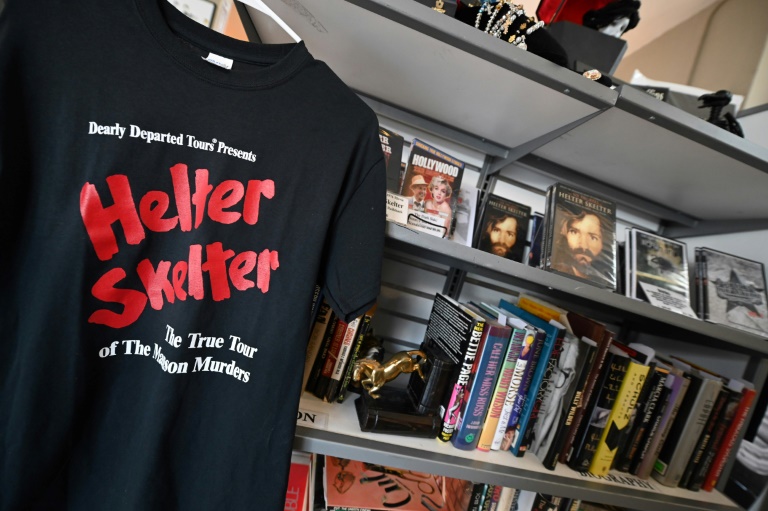 Souvenirs related to the Manson murders of 1969.

Rock stars and monsters
Manson died in a California prison in 2017, but the gruesome details of the murders he ordered live on.

Tate, just 26, pleaded for the life of her unborn child as she was stabbed to death by Manson's disciples, four of whom broke into her house at night.

Polanski was away in Europe, but four other guests in their home were also butchered.

Abigail Folger, a coffee heiress, was peacefully reading her book in bed when the attackers stormed in and killed her.

While Michaels' "Dearly Departed" museum in Los Angeles serves up a range of macabre mementos and grisly guided tours of deaths ranging from Janis Joplin to the "Black Dahlia," the Manson murders stand apart.

"It's my favorite case. Favorite sounds awful. But it is, I gotta admit to that," says Michaels, noting that the story "includes rock stars and movie stars and glamor and monsters."

Peggy Miles, 56, who grew up close to the killings in west Los Angeles and is similarly fascinated, is taking the "Helter Skelter" tour.

She says that in the eyes of many Americans, the killings transformed the hippie counter-culture from a fringe curiosity or nuisance into something dangerous or even evil.

"It made it into a really scary thing when you saw the hippies - it was like 'Oh my God, I don't want to go near them,'" she says.

Many of her neighbors installed gates or bought guns, and she was no longer allowed to walk to school alone.

The tour is named after Manson's crazed plan to spark a race war in the United States - itself named after the Beatles song.

Also on the bus is 28-year-old Lauren Kershner, who became obsessed with Manson's cult as a young teenager and has read prosecutor Vincent Bugliosi's bestselling book on the case five times. 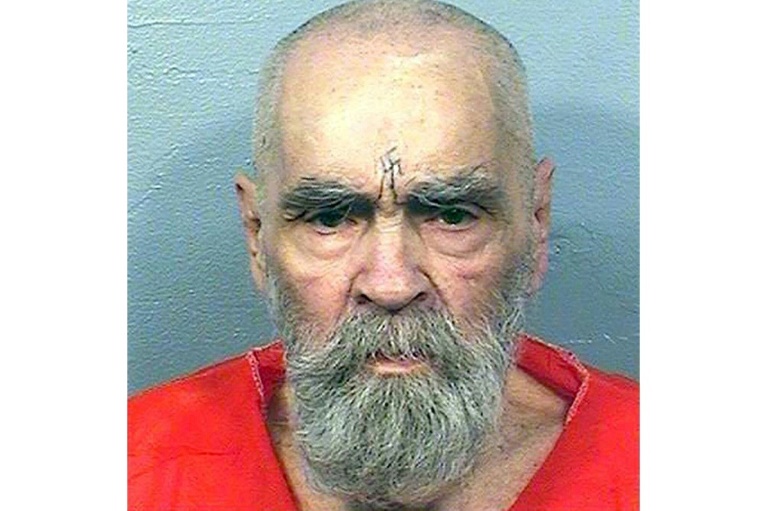 Charles Manson ordered devotees to carry out killings in wealthy white neighborhoods in an effort to trigger a race war.

"I'm pretty much in town for the 50th anniversary," she said.

"Manson had such complete mind control over people that he could get them to kill for him. That's just really fascinating to me," she added.

Michaels says such fascination with the details is common, extending even to Tarantino who contacted him ahead of shooting "Once Upon a Time" for assistance with research and location scouting.

The director asked Michaels endless questions ranging from the Cielo Drive house's previous occupants to which book Folger was reading when she died.

"I'm not celebrating it. But this is what I do."