Hong Kong leader insists she will stay on

Hong Kong Chief Executive Carrie Lam insists she wants to stay on as leader, after an audio recording emerged of her saying she would quit if she could.

INTERNATIONAL NEWS - Hong Kong's embattled leader insisted Tuesday she had no intention of stepping down after an audio recording emerged of her saying she wanted to quit over three months of unrest in the southern Chinese city.

The protests have evolved into a wider democracy campaign involving clashes between protesters and police, in the biggest challenge to China's rule of Hong Kong since its 1997 handover from the British.

"I told myself repeatedly in the last three months that I and my team should stay on to help Hong Kong," Lam told a press conference on Tuesday morning.

Lam said she had "not even contemplated" discussing her resignation with the Chinese government, which gives Hong Kong a restricted form of autonomy.

"The conflict that I myself want to quit but cannot quit does not exist," she said. 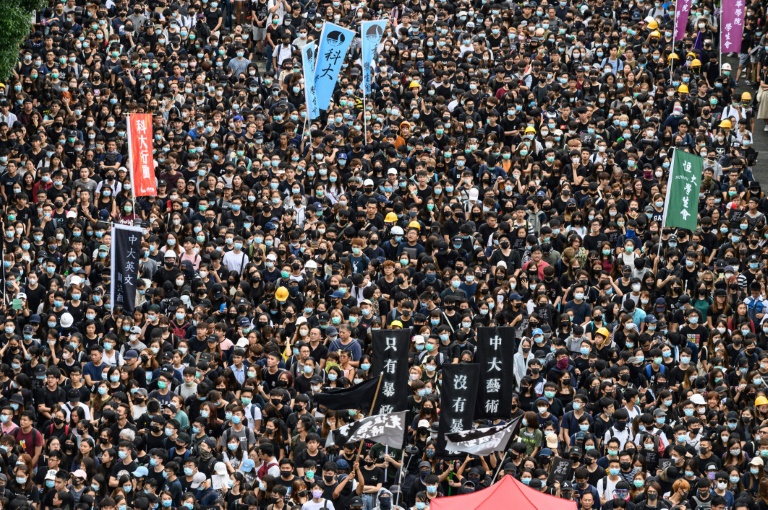 Pro-democracy protests have seen millions of people take to the streets for nearly three months.

Lam was speaking after Reuters news agency released an audio recording of her telling business leaders last week that she wanted to step down and take responsibility for the unrest.

"For a chief executive to have caused this huge havoc to Hong Kong is unforgivable," an emotional Lam said in the audio recording.

"If I have a choice," she said, speaking in English, "the first thing is to quit, having made a deep apology."

Lam told the business leaders she had "very limited" room to resolve the crisis because it had become a national security and sovereignty issue for China.

On Tuesday afternoon Beijing repeated its support for the chief executive, but warned it would "never allow the situation in Hong Kong to continue unabated".

"If the situation continues to deteriorate and moves into the turmoil that endangers national sovereignty and security, that is beyond the control of the (Hong Kong) government, the central government will never sit idly by," said Xu Luying, spokeswoman for the Hong Kong and Macao Affairs Office of China's central government.

However, in the leaked recording Lam said she believes Beijing has "absolutely no plan" to send in its People's Liberation Army: "They know that the price would be too huge to pay."

She also claimed that Beijing "does not have a deadline" for clamping down on the unrest and that celebrations on October 1 - the 70th anniversary of the People's Republic of China expected to trigger huge protests - would go ahead in a modest way.

Lam has described the leak of the recording as "unacceptable", and denied that she or her government had orchestrated it.

But protesters online have accused the leader of trying to drum up sympathy for her position. 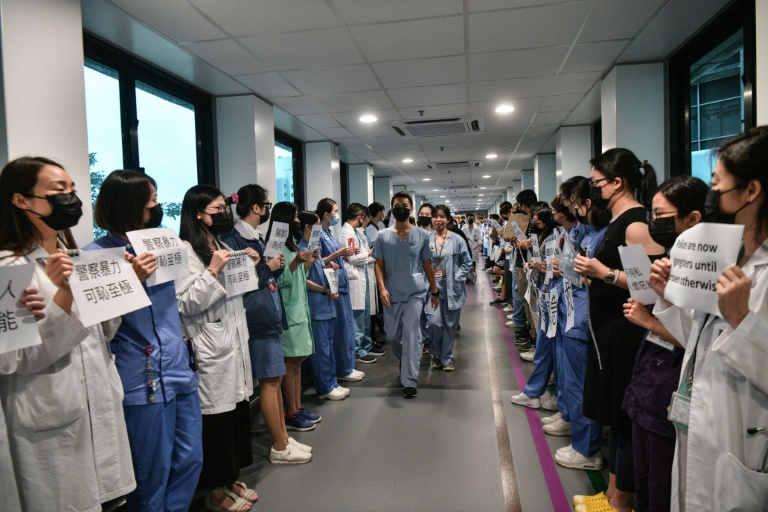 Medical staff at a public hospital in Hong Kong form a human chain in solidarity with pro-democracy protests.

"I think she wanted this recording to come out, she wants to give the impression she's innocent and apologetic about what's happening," said Bonnie Leung from the Civil Human Rights Front, which this summer has organised some of the largest rallies the city has ever seen.

"Either Carrie Lam lied to the business leaders last week or to the public of Hong Kong this morning," added pro-democracy lawmaker Lam Cheuk-ting.

On Tuesday, hundreds of people filled a park in the heart of town in the latest organised demonstration, as students also continued a two-week university boycott launched on Monday.

Earlier in the day Ivan Lam, the chairman of pro-democracy party Demosisto which helped organise the class boycott, was arrested at Hong Kong airport on suspicion of "inciting others to join an unauthorised assembly", the party said.

More than 1,100 people have been arrested since June when the unrest began, including a swoop of key pro-democracy leaders and politicians.

Rallies over the weekend saw some of the worst violence of the crisis, with protesters throwing bricks and petrol bombs at police, who responded with tear gas, water cannon and baton charges.

China has responded by ramping up threats and intimidation, including by warning its security forces could intervene.

An editorial by China's state news agency on Sunday warned the protesters that "the end is coming".